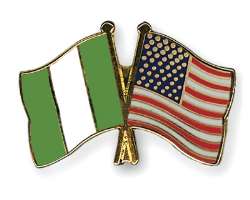 A 23 years old Nigerian musician, Victor Adimike, aka SK Mode, who got married to a 62-years old Columbian-American widow, Amelia Felix, has been granted an immigrant visa into United States of America after long wait.

The couple met online in 2008 and got married at an Akure registry in September of same year, however all effort by Adimike to relocate to the United States to stay with his wife was fustrated by the US embassy in Nigeria and the Children of Amelia who allegedly opposed the union.

The Encomium reported that the eldest of Amelia's children is 40 years while the youngest of the three children is 33 years.

In a chat with the weekly tabloid, the couple gave account of how they met before they finally agreed to be husband and wife.

"The fisrt time i saw him,{via web cam} I started to cry. I cried because when i saw how young he was, I was really startled, But I felt an attraction for him that I could not understand..that was when I knew I had to meet him in person" Said Amelia.
She Continued that she tried to keep away from him for some time failed "The attarction was so strong that I used to run straight from work to the computer to talk to him when we started talking again"she said.

The 23 years old Vctor is an only Son and a recording artsist with an album entitled Mode N Style.

"My Joy is boundless, At one point, I even got angry that I told the embassy people that I never needed the visa again, but that my wife should come down to Nigeria and be with me.

I am doing well here as a musician with my own car, i am a fully qualified video director and i produced my album myself, I met my wife while i was looking for a way to promote my music outside Nigeria. I already have a partner in New York and could travel to the U.s myself" he said.