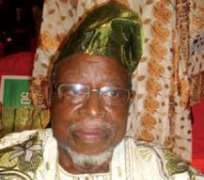 He is regarded as one of the pillars behind what we call the movie industry(Nollywood)today.He is one of the pioneer artists that first took drama from stage to cinema in the 80s with “Orun Mooru” and the rest.

We gathered from those who should know that this octogenarian is seriously down with stroke.

Baba Sala produced the movie,Aare Agbaye in 1983 and Mosebolatan in 1985.

All efforts to reach his daughter to confirmed the story proved abortive.