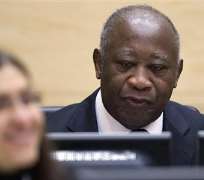 Ivory Coast's former president Laurent Gbagbo appeared at the International Criminal Court on Monday, facing charges of crimes against humanity, including murder and rape, the first former head of state to be tried by the court since its inception in 2002.

Gbagbo, 66, was arrested and flown from Ivory Coast to the Netherlands last week, and has since been held at a detention centre in The Hague.

Dressed in a dark suit, white shirt and dark blue tie and looking rested and in good health, Gbagbo confirmed his identity and told the world's top war crimes court conditions at the detention centre where he has been held were "fine".

About 3,000 people were killed and more than a million displaced in a four-month civil war in Ivory Coast after Gbagbo refused to cede power to Alassane Ouattara in last year's election.

Results certified by the United Nations showed Ouattara won the election by a near 8-point margin, but his rival refused to concede and cracked down on suspected Ouattara supporters.