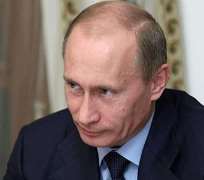 Vladimir Putin's United Russia party faces an array of Communists, nationalists and liberals in a parliamentary election on Sunday, but one of its ardent opponents is a more peculiar political animal: a cartoon pig named Nakh-Nakh.

Pushed to the margins since Putin came to power 12 years ago, some of the prime minister's fiercest foes are urging Russians to reject the political system he has put in place by spoiling their ballots in Sunday's State Duma vote.

"This is not an election in the European sense of the word, because no party that presents a challenge, or has not been agreed with the Kremlin, has been allowed to run," said satirist Viktor Shenderovich, a co-founder of the Nakh-Nakh movement.

"The question is what people who understand this is a farce should do."

Their answer: Nakh-Nakh, a bespectacled pig with an orange scarf, a blue beret and a double-entendre of a name that to Russians evokes both the Three Little Pigs and an obscenity which, put more politely, means 'Go away!'.

Shenderovich and his allies have enlisted Nakh-Nakh to show Russians how to show what they think of the election.

In a series of animated clips posted on the Internet, the pink-cheeked pig casts his vote, angrily marking the box for each party with an X and adding a big black X across the entire ballot before slipping it through the slot.

A caricature of Putin appears repeatedly: in a poster on the wall of the polling place, atop the shoulders of all the poll workers and adjacent to the names of all seven parties' names on the ballot.

In one clip -- "Nakh-Nakh's Scary Dream" -- the pig attends a Kremlin banquet but soon finds he is the main dish, an apple stuffed in his mouth and his body carved into butcher's cuts labeled with the names of the seven parties on Sunday's ballot.

The message: It's the same no matter how you slice it.

"Cross out the thieving authorities. Spoil the celebration. Come to the election. Vote against all," one clip says. "Vote for Russia."

AGAINST ALL
Russians used to be able to register disapproval of their choice by marking an "against all" box on the ballot.

Nearly three million voters did so in the 2003 election to the Duma, Russia's lower parliament house. The "against all" option received 4.7 percent of the votes, more than 19 of the 23 parties on the ballot.

The Duma then passed legislation striking the "against all" option from ballots, part of a series of electoral reforms enacted during Putin's 2000-2008 presidency that critics said were meant to silence dissent and strengthen his grip on power.

The Kremlin-controlled parliament also raised the threshold needed to win State Duma seats to 7 percent and threw up other barriers to potential challengers.

Putin's political foes have also faced plenty of other hurdles, from riot police that routinely break up unsanctioned protests to tightly managed national television and federal authorities they say have barred them from elections illegally.

One of Nakh-Nakh's founders is Boris Nemtsov, a former deputy prime minister and now co-leader of the People's Freedom Party, which is not on the ballot because it was refused registration by the Justice Ministry earlier this year.

"Not a single party that opposes Putin has been registered in the past decade," Nemtsov said.

The result is a Duma dominated by United Russia and filled out since 2007 by the Communists, the nationalist LDPR and Just Russia -- all dismissed by critics as an artificial opposition the Kremlin uses to let off steam.

"Only a very naive person could consider these to be opposition parties," said Shenderovich. "They have been part of the system for 20 years."

Sunday's vote, which sets the stage for a March presidential election in which Putin plans to return to the Kremlin, is unlikely to change that system radically.

Pollsters predict United Russia, which now holds 315 of the 450 Duma seats, will emerge with a smaller majority, but the same parties in the outgoing Duma are expected to win representation, with no newcomer joining their ranks.

HOW TO SAY NYET?
Many Russians are unhappy with the choice at hand and millions believe the vote will be manipulated in United Russia's favor, but some of the Kremlin's harshest critics disagree on how voters can make their opinions count.

Bloggers have traded opinions on the issue, and Nemtsov has defended Nakh-Nakh's strategy in a debate this autumn with other government opponents who advocate different approaches.

Alexei Navalny, a anti-corruption blogger whose description of United Russia as the "party of swindlers and thieves," has gained prominence on and off the Internet, argued that the best way to undermine the party is to vote for one of its opponents.

Chess legend Garry Kasparov, a fierce Kremlin critic and an ally of Nemtsov, called for "a full boycott of the farcical election procedures."

Activists have tried to spread their message by handing out black-on-white ribbons bearing the phrase Nakh-Nakh and one of several slogans, which can be used as armbands or tied to handbags and car-door handles.

Nemtsov, who has repeatedly been arrested and jailed for street protests in recent years, said police had detained dozens of activists distributing the ribbons and other material in cities across Russia ahead of the vote.

At a protest outside the Central Election Commission headquarters in Moscow this autumn, camouflage-clad riot police seized about a dozen opposition activists -- some wearing the black-on-white armbands -- and muscled them into a waiting bus.

Nemtsov and other leaders of the unregistered People's Freedom Party plan to cast their X-marked ballots together in Moscow on Sunday, and he said he hopes more than 1 million Russians will do the same.

Semyon Zon-Zam, a chamber orchestra director in Moscow, wore an armband at the protest outside the Central Election Commission, said he would be one of them.

"The political system is dragging my country into the abyss," said Zon-Zam, 73. "To vote for any party on the ballot would be to support the a Kremlin project."

But in Tula, a city south of Moscow, a 20-year-old student who gave only her first name, Marina, said she would vote for the liberal Yabloko party in the hope it could win Duma seats.

"Somebody needs to counteract United Russia," she said.