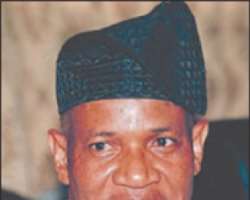 Chief Olusola Oke, speaks on issues concerning the party. OLUSOLA FABIYI was there

Leaders of the PDP from the South-West zone visited the National Working Committee, can you give us a synopsis of what was discussed in that meeting?

Actually, the people that met with us were leaders of our party from Osun State and not the entire South-West. However, the National Vice-Chairman was part of the delegation or better still, he led the delegation. We know that our losing the South-West was not substantially due to the popularity of the Action Congress of Nigeria, it was due to internal wrangling within the party. So, any idea that will reposition the party, unite our efforts and bring all the forces together would be a welcome idea.

What is the NWC doing about Lagos State concerning all the factions springing up there?

This proposal from the zonal chairman is also capable of resolving that. The problem in Lagos State, like most of the other states in the South-West, is that you have executives that are labelled, may be incorrectly or correctly, as belonging to a faction. So, if the proposal of the zonal chairman is approved, it would then mean that we will have a transitional committee where every interest would subscribe to and then, they would be able to go to congresses and conduct a purely democratic election that would bring on board every interest within the party. So, we believe this is a solution or a likely solution to the problem in Lagos State.

How far has the committee, which you chair, gone with the party's constitutional review?

Second, there is also the need to review some of the strategies for handling our internal affairs, like the emergence of our candidates.  We have always adopted indirect primary method for picking our candidates, but people are of the view that the pendulum is ticking towards direct primary where you will be able to involve every registered financial member of the party in the choice of who becomes the candidate at any level.

Part of the provisions we are also looking at is the issue of gender.  From what the President has done, we have gone beyond the 15 per cent provided for in our constitution. The popular percentage worldwide today is 35. We are thinking of updating our constitution in that regard. We are going to strengthen our organs: the NWC, the NEC; we are also going to deal with the issue of finance, although we have a provision in the constitution about finance, we found that party funding, which is to come from subscription of members, has not been enforced. So, we are going to put in place a mechanism to ensure that nobody enjoys any right in the party unless they have paid their dues as at when due.

This is also part of what we are looking at: the issue of waiver, which of late, is grossly abused. It is going to be reviewed. You have to spend a minimum time within the party before you can even ask for a waiver. Ordinarily, the provision is that you must have been a member of the party for two years before you can run for a position.  We also want to include the provision and we are proposing that before you can even ask for a waiver, you must have spent six months or at least one year. That will mean in essence that, it will not be possible for somebody just moving from another party into our party to ask for a waiver.

We are going to control some of these areas and of course the issue of people returning after leaving the party. This provision is among the ones we are going to strengthen so that if you return, you don't just sneak back into the party, the whole public must know that you left and you are coming back.

As the National Legal Adviser from 2008 till date, what have been your achievements and challenges?

When I came on board, I discovered that there was no organised legal system to defend party activities; there were no organised arrangements to advise the party on legal matters. I also found out that pre-eminence was not given by the party to the legal directorate on legal matters. Everybody was just handling each directorate as if it was independent and so, the first thing that I did was to restructure this office. Second, I brought up enforcement of the provision of the constitution, which vests in the national legal adviser the power to advise the party and to defend all actions of the party and its officials. The first thing we did was to ensure that the party was represented in any legal matter in court because I found out that judgments were arising from none defence of cases. You would just find an enrolment of judgment and you would read and find out that nobody was in court to defend it.

The other thing I also observed was that PDP briefs were just being picked by anybody. Lawyers were just going to court to represent the party without authorisation and bills were piling up. So, all of these I streamlined to ensure that every matter where PDP was served, there was a counsel to go to court to represent the party. I also strengthened the internal legal machinery for defending the PDP.

How much did you inherit as debt when you came into office?

I inherited over N1.2bn as unpaid bills. These were unsubstantiated briefs or cases. I use those words guardedly – unpaid and unsubstantiated bills. Somebody would just take a brief and say oh, my bill is N100m and forward it to the party without an instruction to that effect.