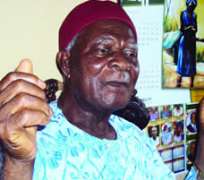 Since last Saturday, when the news filtered into town that Dim Chukwuemeka Odumegwu-Ojukwu has died in a London hospital, Nigeria and the Igbo nation have been thrown into mourning. However, in his hometown, Nnewi, in Anambra State, his kinsmen are still waiting for the Ojukwu family to communicate to them officially that he has passed on, in accordance with their tradition and custom.

This is more so, as the late Ojukwu was a titled man. He held the Ikemba Nnewi title, said to be the highest title in Nnewi.

What is this Ikemba Nnewi title? Who gave it to Ojukwu? His Royal Highness, Igwe K.O.N Orizu III, who spoke through the Place Secretary of Nnewi Kingdom, Prince Joseph Ikeotuonye, explained, in this interview, why he gave Ojukwu the title.

When was the title of Ikemba given to Ojukwu and why did you give it to him?

Well, I gave him the chieftaincy title after the war. I'm not so sure of the date now, but it was as a result of his courage and other battle performances in the Nigerian-Biafran conflict. The name, translated literarily in Igbo language, means the 'tool that the Igbo use to fight,' for the benefit of Nnewi, but for the benefit of the entity known as Biafra then. But there's more to the title than mere words can describe.

Did your kingdom equally give the 'Dim' title to him?

Yes and no. It is not a title that exclusively belonged to him, unlike the Ikemba. The truth is that 'Dim' is an Ozo title that can be taken by anybody in Nnewi, once you qualify. There are many 'Dims' here and there. The title is personalised because he came from Umudim, the third quarter of Nnewi. So, he took 'Dim to represent his ancestors. His forefathers were notable warriors in our town.

What was expected of him from that title?
As I said before, it was as a result of his bravery and courage that he was bestowed with such high honour. Now, since another war was not envisaged, there were no expectations, in terms of another war. Remember, the title was meant to recognise his past exploits. It was a feather in his cap.

Did he touch the lives of the people of the town with the title?

The fact that he took the Ikemba title and later got another from the whole Igbo nation, means that he influenced everybody's life. It was in anticipation of that Eze Igbo Gburugburu, that he was given the Ikemba. Because people expected that he will do more, and he lived up to expectation, because, before he died, he constantly expressed his views in the Nigerian arena. As you can see, everywhere is awash with eulogies for him. That portends clearly that he lived up to expectations concerning the unity of the country, and also fought against the marginalisation of the Igboman, and was still in until he died. You can see the position of the South-Easterners that the Igboman has remained in the background, so to say, in most appointments in Nigeria.

Have the youths of Nnewi emulated anything from his prowess?

Yes, there was this 'Ikemba Front' that was in the vanguard of his political pursuits. It was a youth vanguard that came into being, when he came back from exile. It was the youth wing of the NPN, then. So, even at that, everybody there wanted to die with him, and they were ready to fight, but clearly, during those post-war days. Gradually, the enthusiasm and excitement waned and dwindled with time, but you can see the replica of this organisation in Imo and Abia states, who are more prominent in pronouncing their followership.

It seems that the Ikemba is not duly recognised in his hometown, because there hasn't been any visible reaction from this town since his demise?

If I may borrow the saying that a prophet is not recognised in his own vicinity, but then, we are awaiting instructions from the state government, as to what they are planning with the party and the Federal Government, so that we can organise a befitting mourning period for him.

How do you see the seven-day mourning declared by the South-East governors?

It is befitting of a hero that he is. In fact, seven days may not be enough. We might look at a 14-day period, because he did a lot for the Igboman, no sacrifice can be too much for him, because he lived up to expectations. We will blaze the trail in giving him honour, Nnewi is known for that, but that can only come when the family informs us officially.