THE SENATE AND THE OIL INDUCTRY MAGICIANS 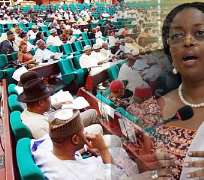 The Nigerian senate chamber has fiery red rug. One would have thought it is the chamber of the House of Representatives that should have fiery red rug. That is because honourable members are fiery. But distinguished senators showed fangs like a dragon lately when they hosted a minister; and now it has become more difficult to differentiate distinguished senators from honourable Reps. Diezani Alison Madueke was the minister that saw red from the senators. She superintends the Petroleum Resources Ministry. “We cannot meet our domestic requirement,” the minister had submitted as part of her answer to a question from senators. She meant Nigeria can not produce the fuel it needs for daily consumption. That “we can’t’ response and the mentality behind it is a point to note because of the quarter it came from. It is a quarter where “We can” should be a watchword if this nation is ever to move forward.

Senators had invited the minister because they wanted to know the facts about Nigeria’s crude, meaning crude oil, as well as the trillions of naira expended on subsidy, and why what had been expended didn’t add up in simple arithmetic. Yet the senators might well have been talking not only about crude oil, but how crudely the nation’s wealth from oil is mismanaged. That’s something government officials don’t make pretence about anymore. They don’t pretend that they don’t have the facts and the figures, that they don’t have a clear picture of what is going on upstream or downstream in the oil sector.

And their grasp of the total revenue accruing from oil sale – how much is spent, how it is spent - is hazy, too. Did Nigerians not notice how the nation’s oil managers heaved and sweated to answer basic questions at the senate committee hearing? A Group Managing Director almost spoke into the mouth of a minister in the attempt to put up a good front, to answer each question that came from senators. The lawmakers barely stopped short of calling their visitor a liar.

At least, on three counts they faulted the claim of the minister that foreign exchange instability was responsible for the amazing rise in the amount claimed to have been expended so far on subsidy. They said figures from the Central Bank, figures from the Petroleum Pricing and Regulatory Authority, PPRA, and other agencies were at variance with the excuses the Petroleum Ministry tendered. In the end, lawmakers ordered their visitor to return and provide answers another day. There can’t be any question that Nigerians want answered that their officials will not have answers for, the Senators insisted. Now the When, Where, What and How questions that lawmakers asked cannot be divorced from the challenges confronting the Nigerian oil sector, and this event has once again called attention to the reforms captured in the Petroleum Industry Bill, PIB.

Transparency and access to information are two of the key challenges in the petroleum industry. It is a reason information that should be on the table of the lawmakers that approve annual budgets in the first place is not. Regularly, and whenever lawmakers shout loud about agencies and department that operate as if they are authorities unto themselves, the oil sector comes first. And the foremost regulatory body, the Nigerian National Petroleum Corporation (NNPC), always comes in for mention. But this corporation has its ready-made denials and it reels it out when attention is called to whatever is not in order. Lately, when there was darkness all over the country, when power generating stations failed to generate power, claiming that gas did not get to them, NNPC said there was nothing of such. And yet there was darkness, and megawatts that officials said was over 4, 000 fell to practically nothing for days. The cock and bull story that lawmakers said the oil managers told about the amount expended so far as subsidy in 2011 was only true to character.

And lawmakers also asked how much of the fuel the nation consumes each day comes from local refineries. The answer was 60 percent. And how much of what is produced locally is PMS? “That’s about 30 percent as well,” that was the answer whispered to the minister before she echoed it to lawmakers was enough indication that the brains saddled with the task of watching over the nation’s resources did not have full grasp of it. Surely, everyone down the line does some abracadabra, bring what they claim is the factsheet up to the top floor, and without any meaningful verification, the heads fed the same to Nigerians. The abuses that go on under that circumstance is best imagined. Rumours are the truth here, and there are stories of GMDs who padded their own figures, as high a one hundred million, into items that got to lawmakers for passage as budget, and when such have been returned approved, private pockets sucked them up.

There is no doubt that for this industry, the introduction of legislation that would clarify matters for all players is the best that should happen. In addition to establishing an accountable and transparent oil and gas industry, there is need to consolidate a plethora of laws, statutes and regulations which regulate the Nigerian oil and gas industry and thus review and streamline existing legislation. This is with the purpose of delivering a fair, economic return for Nigeria as well as for investors. It sounds depressing, but the truth of the matter is that lawmakers will not get satisfactory answers to the questions they want answered for Nigerians. And the more they bring government officials in the oil sector to explains things, the less they will know of what those who have access to the oil wealth do with the nation’s revenue. The abuse is age-long; it is systemic.

What this means is simple: There is need to separate government roles and give these tasks to newly created organizations so that the government no longer continues to have a part to play with regards to policy making, regulation and the commercial angle to it all. That means responsibility for these functions would be split between different agencies. The newly created agencies should be outside the civil service structure, they are professional institutions. This has been foreshadowed in the PIB that is lying somewhere under the lawmakers’ dome. It is getting it to become law as quickly as possible that senators should focus their energy.