Merkel Fights For Euro She Says Is Stronger Than D-Mark 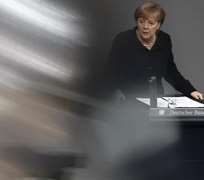 German Chancellor Angela Merkel vowed on Friday to defend the euro, which she said was stronger than Germany's former deutschemark, but she warned that Europeans faced a long, hard "marathon" to restore lost credibility.

"Resolving the sovereign debt crisis is a process and this process will take years," Merkel said in an address to parliament.

She called for a long-term approach to tighter fiscal integration in the euro zone, with tougher budget discipline, and dismissed the possibility of massive Fed-style money printing by the European Central Bank.

"The European Central Bank has a different task from that of the U.S. Fed or the Bank of England," the German leader said.

However the Sueddeutsche Zeitung daily said Merkel was willing to see the ECB step up its buying of troubled euro zone countries' bonds as a bridging solution until budget controls took hold.

Speaking a week before a European Union summit seen as make-or-break for the 17-nation single currency area, Merkel ruled out issuing common euro zone bonds as a crisis solution, saying that would breach the German constitution.

Instead, she called for a mixture of greater European powers to control national budgets, to be enshrined in treaty changes, and smart use of the euro zone rescue fund to stabilize markets.

World stocks and European bonds continued to recover on hopes that euro zone leaders may be moving closer to a comprehensive solution to the debt crisis.

Merkel's speech set the agenda for seven days of intense diplomacy to try to frame a new political deal to restore shattered market confidence and give the ECB grounds to act more decisively to defend the euro.

On Monday, Merkel will travel to Paris to outline joint proposals with French President Nicolas Sarkozy for treaty changes to entrench stricter budget controls, with automatic sanctions on deficit sinners.

Sarkozy embraced German calls for a new treaty tightening fiscal discipline in a policy speech in Toulon on Thursday, but in contrast to Merkel, he made no mention of greater powers for the European Commission and European Court of Justice.

Instead, the French leader, struggling to win re-election next May, called for an "intergovernmental" Europe in which the presidents and prime ministers of euro zone countries would be the ultimate arbiters over national budgets.

His socialist opponents denounced him for advocating an "austerity treaty" dictated by Germany.

Merkel went out of her way to rebutt such accusations, telling the Bundestag it was "misleading" to suggest Germans were trying to dominate Europe.

Cameron is under pressure from Eurosceptics in his own Conservative party to loosen Britain's ties with the EU while securing guarantees that any move towards fiscal union on the continent does not harm the interests of the City of London financial centre.

On the markets, German 10-year Bunds outperformed safe-haven U.S. Treasuries and British Gilts as investors saw prospects of an EU summit deal and ECB action to ease funding for cash-starved banks and to counter a looming recession in Europe.

Yields on Italian and Spanish debt fell further on hopes of a euro zone solution. Italy's 10-year bond was down to 6.65 percent, well below the danger levels close to 8 percent they hit last week, which analysts said could make it impossible for Rome to refinance its debt next year. Spain's 10-year borrowing cost tumbled to 5.68 percent.

Despite their very different tone, Merkel and Sarkozy coordinated their speeches in advance to ensure they would not be incompatible, aides to both leaders said.

German officials praised the conservative Sarkozy's courage in telling voters, in what the business daily Handelsblatt called a "blood, sweat and tears speech", that France would have to overhaul its social model and cut public spending.

Peter Altmaier, chief whip of Merkel's conservatives in the Bundestag, told German radio: "In Germany we have been tightening our budget for some years. Nicolas Sarkozy said yesterday that Europe must achieve a reduction of its debt, and that will only happen with iron discipline in national budgets.

"We have so far managed to fix a German-French position on all the important decisions on Europe in recent months. I am very confident that we will be able to reach a common position with our French friends by the summit next week. There is much more uniting us than dividing us."

The mass-circulation German daily Bild said Sarkozy and Merkel appeared to agree in principle on the idea of tougher rules for euro debt violators.

"But there are still differences on the controversial question of common euro bonds. Merkel is against. Sarkozy in favor," Bild said.