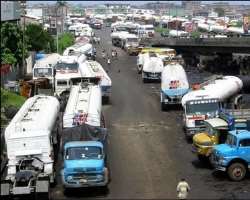 ABUJA, December 01, (THEWILL) - The House of Representatives Thursday directed the federal Ministry of Works, the Federal Road Safety Commission and the traffic department of the Nigerian Police Force to immediately carry out regular traffic management on Nigerian Highways and to relocate trucks to designated trailer parks.

The police is to amongst other areas sanitize Tafa village along Abuja-Kaduna highway, where parking of petroleum and highly inflammable articulated trucks obstruct free flow of traffic daily.

Consequently, the House mandated its committee on legislative compliance to ensure compliance of the directive as members further urged the FRSC and other related agencies of government to take adequate measures against motorists to ensure strict compliance to traffic regulations and effective maintenance of the vehicles.

The resolution was upon a motion sponsored by the deputy minority leader of the House, Hon. Suleiman Abdulrrahman Kawu Sumaila (ANPP, Kano) in which he drew the attention of the House to the ugly situation on Nigerian roads, with specific reference to the Suleja-Kaduna express road where innocent people have become accident victims on account of the indiscriminate parking of articulated Trucks.

According to Sumaila, the indiscriminate parking of the articulated Trucks at Tafa village along the Abuja-Kaduna Express has been the major cause of avoidable ghastly accidents and posing serious threat to lives and property.

He stated that, “The possibility of fire outbreak is very high due to the presence of thee articulated Trucks and, most especially, the inflammable nature of the load they convey, mainly petroleum products.

“We are aware that a vehicle with Abuja registration Number AE 169 YAB crashed at Kwaka village along Suleija-Minna Highway where these petroleum and highly inflammable articulated trucks dangerously and arbitrarily parked.

“Regrets that thirty nine persons were killed and sixty four others seriously injured in a fatal road crash along Suleja-Minna road when an articulated Truck with Kaduna registration number XA 551 BNG swerved off the road at a sharp bend as a result of over speeding.

“It should also be noted that several accidents and fire incidents reported nationwide involving articulated Trucks conveying petroleum products and other heavy vehicles parked along the highways in the cities of ENUGU, Lagos, Warri, and Makurdi.

“That the presence of these articulated Trucks pose a lot of danger in communities, places where travelers stop to refresh and shop has become dangerous spots and death traps, causing serious traffic congestion to other road users,” the lawmaker stated.

In a related development, the House also approved the motion brought by Hon. Abdullahi Dan-Alkali (PDP, Kebbi) and three others on the deplorable condition of the Zuru-Rijau-Kontagora federal Highway.

Adopting the motion, the House urged the ministry of works to include the federal road in the 2012 budget for rehabilitation.

Members also urged the FERMA to effect rehabilitation and maintenance on the said road to ease the suffering of millions of its users and ensure safety of goods and vehicles of the citizenry.