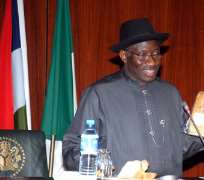 ABUJA, November 30, (THEWILL) - The House of Representatives today backed down on its earlier stand on the N98.4 billion virement proposed by the executive as it passed for second reading the bill and committed it to its committee on appropriation for close study.

The virement is in respect of some ministries, departments and agencies of government.

The House had last month deferred debate on the virement proposal when it became clear during the plenary that members were not favourably disposed to admitting it.

But at today’s sitting, the House presided over by Speaker Waziri Tambuwal went into an executive session. At the end of the session that lasted for about an hour, Speaker Tambuwal announced that the House had resolved to continue to perfectly work through legislation to ensure safety of all Nigerians.

Leading debate on the bill, Leader of the House; Hon. Mulikat Akande-Adeola explained that the approval of the virement was imperative to ensure completion of ongoing projects before the end of the year.

She listed the projects as the East-West Road, the Lower Usman Dam, National Research Institute, Vom and police formations and commands across the country. Other projects for which virement is being sought include the rehabilitation and renovation of military barracks, modernization of airports and additional funds for election petition tribunals.

Chairman of the House committee on appropriation, Hon. John Enoh who spoke in favour of the bill disclosed that about 700 projects were on going and needed to be completed. He said it was the responsibility of the National Assembly to appropriate money for the good governance of the country and if they were ongoing projects that require money to be completed, it behooves on the House to grant the President’s request.

Speaker Tambuwal did not waste time in putting to question the matter and it was approved as there was no dissenting voice.

While referring the virement to the appropriation and other relevant committees for further scrutiny, Tambuwal noted that the idea was to check the abuse of the process explaining that if it is found to be unfavourable to the overall development of the country, it can still be cancelled.

Export Processing, Federal Ministry of Science and Technology and its parastatals and the Niger Delta Ministry are other ministries and agencies accommodated in the virement request.

While briefing correspondents after the plenary, House spokesman, Hon. Mohammed Zakari explained that the House passed the virement bill after a thorough consideration of the proposal and realization that those in support of it were in the majority.

Speaking on the planned removal of fuel subsidy, Zakari said the House’s position on the issue has remained unchanged insisting that the President needs the endorsement of the National Assembly to remove petroleum subsidy.