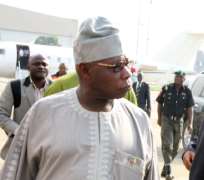 ABUJA, November 25, (THEWILL) - The Senate opened debate on the probe report of the commercialisation and privatisation activities of the Bureau of Public Enterprises (BPE) with most senators openly calling for the indictment of former President Olusegun Obasanjo.

They averred that Obasanjo practically spearheaded the rot that was perpetrated by the bureau.

The report which was authored by the Senator Ahmad Lawan-led Adhoc Committee had turned up damning reports against some of the major actors involved in the process, while recommending the sack of the current Director General of the bureau, Ms Bolanle Onagoruwa.

Also, senators at a stormy debate today on the report warned that non implementation of the report which indicted some high profile government officials may create credibility problem for President Goodluck Jonathan.

They declared that the implementation of the committee’s report would show how determined President Jonathan is in the fight against corruption.

The report of the probe panel indicted former minister of the Federal Capital Territory (FCT) Mallam Nasir El-Rufia, former Director of the Bureau of Public Enterprises (BPE) Dr Julius Bala, and his successor in office, Mrs Irene Chigbue, for allegedly taking orders from former president Obasanjo instead of the National Council on Privatization (NCP).

Specifically, the panel recommended the immediate sack of Onagoruwa for her alleged fraudulent sale of the 5 percent government share in the Eleme Petrol Chemical Company to Indorama Company Limited at a ridiculously low N4.3 billion.

Senators who spoke on the report alleged that most of the so-called core investors only fronted for some persons who according to them lacked the technical competence and financial muscle to run the enterprises better.

But chairman of the committee at the session insisted that the recommendation, asking the NCP to revoke the sale of Daily Times Nigeria to Folio communication was in tandem with an earlier court ruling stripping folio of the ownership of the DTN.

According to him, the recommendation of the committee was based on the court order which recoginized a new ownership of DTN. The explanation followed observation by Senate President Senator David Mark who drew the attention of the chairman that Folio had gone to court to defend its ownership of the DTN.

The senators were however stunned when Senator Shola Adeyeye (Ekiti north AC,N) told the Senate how the son of former president Obasanjo allegedly brought the Indian company that bought the Ajaokuta steel company , which later embarked on ‘mass looting of the company’s assets back to India.’

He said that it was wrong to heap the blame of the alleged irregularities in the privatization exercise on former Vice President, Alhaji Atiku Abubakar when his boss Obasanjo who gave certain approvals in contravention of the privatization laws would go unpunished.

In his contribution, Senator Smart Adeyemi (PDP, Kogi) warned of the danger of not implementing the report.

"I salute the leadership of this Senate for allowing this probe to go on. If you look at this report, you come to the conclusion that privatization at its concept was good but its implementation, to a large extent, was against the national interest. The Indians who bought Ajaokuta Iron and Steel, rather than turn it around, dismantled the equipment and exported them to India. Today, we are exporting the same steel from India. Mr. President, this government must summon the political will to implement the resolution of this committee. Some people bought national assets, retrenched workers and built personal empires.

"The credibility of our Senate will be tested by this report. There are powerful Nigerians involved in this thing and they must be made to face the wrath of the law. If we decide to privatize everything, it will come to a point when children of the poor won't have anything again.

"If we go ahead to implement the resolutions, good. If not, someone who has the political will will come along and do it,” he stated.

Senate Minority Whip Abu Ibrahim (CPC, Katsina) in his contribution however argued that it would unfair for the Senate to recommend punishment for the former BPE bosses for allegedly taking orders from the former president and failed to recommend same for Obasanjo.

According to him, “the report is comprehensive and decisive. I am worried that the main culprit who signed these documents has been left out. This Senate would have been encouraged to indict such person. Such person should be reprimanded.

Senate deputy leader senator Abdul Ningi in a contribution said “It is saddening that the government through the BPE has betrayed the trust reposed on them. If we have compromised as an institution before, I can confirm that this committee did not compromise.”

Senator Olubumi Adetumbi (ACN, Ekiti) in his contribution also said ‘We must point really to, where the issue lies. A former leader of this country, who under oath swore to defend the Constitution and the laws of this country is the same person, who in an imperial manner, took decisions to issue executive directives and approvals in contravention of the processes that are enshrined in the privatization act, signed by himself. That is really the thrust of this report. The findings of this committee are revealing of executive recklessness.

“The point must be made as a representative of the people. This institution must take some decisions. The enabling environment study around the world says Nigeria is not a safe place to contract. The former president presided over the prodigal sale of our commonwealth. In additional to this prodigal sale was an expenditure on this returns and part of the proceeds were used to finance other companies.

“It is for us to know that what we are doing here is self censorship because we had privatization committees during those periods. When executive directives are given to civil servants by those who appointed them, we cannot reprimand those who were given directives when the givers of these directives are not questioned,” he added.