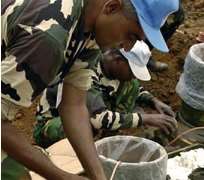 Before 2004 it would take three to four days to travel to Juba from the border towns of Nimule and Kapoeta. Cycling was the safest means of transport. The entire area of what is now South Sudan was a war zone, and was covered with an unknown number of landmines.

Even now that South Sudan is independent, landmines continue to hinder movement, dissuade investors and frighten returning refugees. All 10 states of South Sudan report mine-related injuries and deaths. As of mid-2011, according to the UN Mine Action Coordination Centre (UNMACC), there were a total of 1,243 injuries and 3,158 deaths from landmines.

“UNMACC works with several UN agencies to reduce the threat and impact of landmines and explosive remnants of war throughout South Sudan,” says Sarah Holland, a programme officer with the centre. Besides collaborating with various UN agencies and the UN Mission in South Sudan (UNMISS), the centre works with international and national non-governmental organizations, three commercial contractors and the South Sudan government. As of September 2011, Ms. Holland reports, a total of 4,273 anti-tank mines and 25,487 anti-personnel mines had been destroyed.

In February 2004, the first of the private contractors came into southern Sudan, Mechem, a subsidiary of Denel, the state-run South African arms company. It began mine survey operations near the border with Kenya in anticipation of a peace agreement (which was concluded the following year). Mechem was contracted by the UN Office of Project Services to begin demining work and take advantage of the ceasefire. Around the same time the UN’s World Food Programme (WFP) contracted the Swiss Foundation for Mine Action (FSD) to do the same. The two UN agencies were convinced that demining was the only way to cut the costs of transporting aid into southern Sudan from their bases in Lokichoggio, Kenya.

Jaco Crots, Mechem’s manager in South Sudan, has vivid recollections of when they came in from Lokichoggio. “Owing to the dangers posed by mines, very few vehicles dared to use the road to Juba, as the entire road network into Juba had been planted with mines. No meaningful development could take place here without serious demining,” he recalls.

With global experience in mine removal and a track record dating back to 1991, Mechem was able to mount a major operation. It brought in custom-made mine-resistant vehicles, metal detectors, excavators, sniffer dogs and experienced personnel. Its contract has since been repeatedly renewed.

“We worked long hours in the sweltering heat,” explains Mr. Crots. “And we could not afford to overlook some areas, as we are dealing with safety issues and lives. We had to get it right, and we did it in record time.”

Although Mechem was the first, others also joined the demining effort. They included Danish Church Aid, Landmine Action from the UK and RONCO, a commercial demining company, as well as a southern Sudanese non-governmental organization, Operation Save Innocent Lives. There was also an all-female demining team supported by Norwegian Peoples Aid, which was active in Yei.

According to the government’s South Sudan Demining Commission (SSDC), 1,653 dangerous areas have been identified. Of those, 559 were cleared of mines by the end of 2010.

The various groups involved in mine-clearing have so far opened up 20,047 kilometres of roads. In 2006 some 140 southern Sudanese soldiers were trained, with British Army assistance, at Kenya’s International Mine Action Training Centre in Nairobi. After they returned home in mid-2007 they cleared mines off the 446 kilometre Wau-Babanusa railway in less than five months. In addition, since demining began in 2005, a total of 1,067 square kilometers of land have been released to local communities.

UNMACC and the SSDA estimate that 80 per cent of the most dangerous areas have now been opened, and 96 per cent of identified “contaminated” roads have been cleared.

UNMACC, together with its implementing partners, has also provided “mine risk” education to nearly 1.5 million people, says Ms. Holland, “so that they can learn how to stay safe in areas contaminated or suspected to be contaminated with landmines and explosive remnants of war.” In addition, she adds, 2,700 landmine survivors and persons with disabilities have received assistance, including prosthetics and other mobility aids, as well as access to income-generating projects.

Demining is an expensive affair. On average, the UN has disbursed some $43 million to agencies involved in demining, mine-risk education and victim assistance annually since 2005. But the expense has been worthwhile. Seven years since the start of full-scale demining operations, notable progress has been made in making the world’s newest nation “mine free.”

A WFP study reveals that as a result of demining, the cost of transportation has gone down by 40 per cent and there has been a 65 per cent increase in new business openings. WFP has reduced its own transport expenses by 75 per cent by shifting food shipments from airlifts to ground transportation, thanks to demining. It now takes only three hours — instead of days — to drive to Juba from Nimule, on the border with Uganda.

“Today I look back and am proud of what we have done and are still doing,” says Mr. Crots. “Our work, which is aimed at providing a safe working environment, has made this place a haven of dreams.”