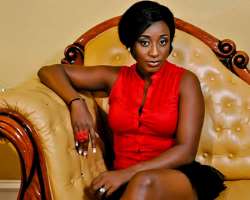 A- List Nollywood star, Ini Edo who recently ventured into movie production with I'll Take My Chances which she jointly produced, is set to premiere her latest work in Lagos. The actress who recently got her appointment with the United Nations renewed as the United Nations youth envoy on environment for another year is putting finishing touch to her preparation.

Anticipation is high and fingers are crossed in the entertainment and fashion capital of Nigeria, Lagos as the movie, I'll Take My Chances comes to town.

Having enjoyed a very successful premiere in Uyo, Akwa Ibom state, the banquet hall of the Meridien Hotel on the 24th September to be precise, the movie is now set to be premiered in Lagos and many celebrities, industry pundits, associates and well wishers are all expected to throng the venue of the premiere in grand style. Following the resounding success and acceptance it enjoyed in Uyo, more is expected when the premiere comes alive in Lagos.

The Lagos premiere of the movie which was jointly produced by the duo of Ini Edo and Emem Isong will take place sometimes in December this year.

I'll Take My Chances centers on a medley of drama, dance, love and suspense, which is intended for people who are very passionate about dance and movies but not like the type often portrayed in most Bollywood films, but this time, it's more Nigerian in perspective and philosophy.

The dance-themed movie boasts of an impressive cast that include the ever radiant Ini Edo, one-time Mr. Nigeria, Bryan Okwara, the president of ANTP, Jide Kosoko, Sam Loco Efe of blessed memory, Biola Williams, Lilian Ikpe, the dance sensation, Ashleigh Clark among others.

Directed by Desmond Elliot, a prolific actor, I'll Take My Chances is a real departure from the frequently seen story lines in the movie industry as the content, style and philosophy behind it distinguishes it from most of the scripts daily churned out by directors and producers alike.

The movie tells the story of I.K, a young theatre arts graduate who majored in dance in the U.S., he hopes to stage a drama but lacks the funds to get through with it, and he also sought the help of his girlfriend, Giselle. However, I.K has to go for his youth service in a village in cross river and there he meets the beautiful Idara( Ini Edo). Despite their obvious differences, the two are drawn together but Idara harbours a secret. She has been selected to be the next High Priestess of Unek, a diety that is worshipped by her people through dance. Something will have to give as she is torn between her love for I.K and the path of destiny chosen by the deity.