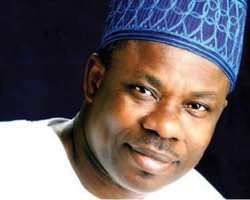 The budget which Senator Amosun christened ‘Budget to Rebuild’, is made up of N99.594 Billion (53 percent) capital expenditure and N88, 306 Billion (47 percent) recurrent expenditure

He said the budget would be financed through Internally Generated Revenue (IGR) of N63. 601 billion, or 47 percent and Federation Account of N70.800 billion, or 53 percent.

Presenting the budget estimates at the State House of Assembly, in Oke-Mosan, the governor explained that 65 percent of the 2012 budget would be spent on his five point agenda of “Affordable education (N41.483 billion or 22 percent), Rural and Infrastructural development/ Employment Generation (N33.432bn or 18 percent), Affordable Housing and Urban Renewal (N22.956 billion or 12 percent), Efficient Healthcare Delivery (N15.706 billion or 8 percent) and Agriculture Production/ Industrialization (N8,813 billion or 5 percent).”

Senator Amosun further told the gathering which included some former governors of the state like Aremo Olusegun Osoba, Navy Captain Oladeinde Joseph, Maj. Gen. Oladayo Popoola, former deputy governor, Alhaji Rafiu Ogunleye as well as the Gubernatorial candidate of the People’s Democratic Party (PDP) in the 2011 election, Gen. Adetunji Olurin, that his government plans to put in place an economic plan that would not continue to be dependent on allocation from the Federation Account.

He explained that he has put in motion a process of re-engineering the finances and the accounting process in the state to eliminate wastages and make the state become financially self-dependent.

He disclosed that his administration intends to “ensure the sustenance of the provision of the free and qualitative education at primary and secondary school levels, construct additional buildings in public educational institutions, embark on massive renovation/maintenance of dilapidated structure in our school and supply furniture to enhance student enrolment, retention and performance”.

Senator Amosun also revealed plans by the government to establish “five model secondary schools with hostel facilities in the three senatorial districts of the state,” and to procure instructional material and textbooks for all students ” in public schools.

On road, he disclosed that the “sum of N24.56 billion representing 13.07% of the total budget for the year, has been earmarked for rural and infrastructural development in our dear State.

"It is hoped that this will transform the face of our dilapidated infrastructure,’ adding that a total of seventeen roads would be rehabilitated during the year.

On health, Senator Amosun said it is the consciousness to reduce disease and make healthcare available to its citizens and develop capacity in our state that made his administration to invest heavily in the sector.

On Industrialization, the Governor said, “our Administration will kick-start the process of industrialization through the implementation of the Industrialization Master Plan which is currently being fine-tuned. We will also play a major facilitatory role for small and medium scale entrepreneurs.

A major initiative in this regard will be the creation of several Industrial Parks across the State while access roads will be constructed in the rural areas to link the existing major roads.”

Other plans by the government includes, the “Provision of soft loan/empowerment facilities to micro, small and medium enterprise in the state; Establishment of Technology Incubation Centres in Ogun West and Ogun East senatorial districts of the state, and the Provision of access roads to the Technology Incubation Centre in Ogun Central senatorial district”.

On housing, he spoke of plans to “Construct two and three bedroom low income housing units across the state; Creation of a robust real estate market that can deliver development at an accelerated rate and Renovate existing Quarters within Ibara Housing Estate."

Governor Amosun added that with the planned removal of petroleum subsidy by the federal government, the state intends to cushion the effect of the development on the people through the re-introduction of mass transit programme.

He said a sum of over N2 billion has been earmarked for the purpose.