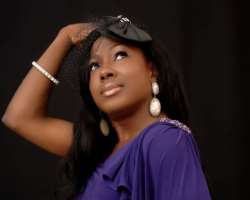 Nollywood actress, Susan Peters, who recently visited Enebeli Elebuwa at the hospital, where the veteran actor is receiving treatment and made donations to him for his treatment, is in the news again.

This time, the sultry actress is making case for children suffering from Asthma, by raising awareness for Childhood Asthma. According to Susan, she noted that she has concluded plans to work with Asthma and Allergy Foundation of Nigeria in other to achieve this.

She told NigeriaFilms.Com that she is raising this awareness to improve conditions for children suffering from and even die from the disease.

“I was asthmatic but don't suffer from it anymore. So, I want to work on its awareness because a lot of people have died not knowing they were asthmatic patients,” Susan informed NigeriaFilms.Com.

Asthma is a common deadly inflammatory disease of the lungs that is characterized by various and recurring symptoms, reversible airflow disruptions. Its cause is believed to be a combination of genetic and environmental factors.

However, with proper management, such as avoiding the triggers, taking prescribed medications, knowing what to do during an asthma attack can conduct a healthy and active lifestyle. Proper awareness has been identified to be a major tool for making sufferers life an active lifestyle. It is believed that more people are suffering from this deadly disease daily.

The United Nations (UN) has earmarked May 13 of every year as World's Global Asthma day. It is estimated that over 50million people are suffering from the deadly disease in Africa while about 5million children are affected in Nigeria.