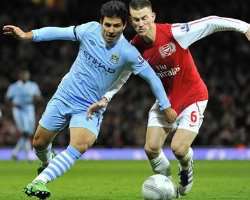 SERGIO AGUERO OF MANCHESTER CITY (L) CHALLENGES FOR THE BALL WITH LAURENT KOSCIELNY OF ARSENAL DURING THEIR ENGLISH LEAGUE CUP SOCCER MATCH AT EMIRATES STADIUM IN LONDON NOVEMBER 29, 2011.
Listen to article

Manchester City edged past Arsenal and Liverpool beat Chelsea to reach the League Cup semi-finals on Tuesday while Cardiff City also made the last four on an emotional night in south Wales.

Premier League leaders City won at Arsenal for the first in 36 years with a late goal by Sergio Aguero earning a 1-0 victory against a much-changed home side in front of a 60,000 crowd.

Maxi Rodriguez and Martin Kelly scored in the second half as Liverpool beat struggling Chelsea 2-0 -- their second win at Stamford Bridge in 10 days -- to heap more pressure on the west London side's Portuguese manager Andre Villas-Boas.

Blackburn Rovers' dismal season took another turn for the worse when the Premier League's bottom club lost 2-0 at Championship (second division) side Cardiff City, who have reached the semi-finals for the first time since 1966.

Manchester United host another Championship side, Crystal Palace, at Old Trafford on Wednesday.

It was a poignant night in the Welsh capital with a ceremony in memory of Wales manager Gary Speed held before kickoff after his death on Sunday.

There was also a minute's silence at The Emirates for Speed with spontaneous applause breaking out for the former Leeds United, Everton, Newcastle United and Bolton Wanderers midfielder who was found hanged at his home in Cheshire.

City manager Roberto Mancini shuffled his squad but still fielded a side packed with internationals including former Arsenal midfielder Samir Nasri who was roundly booed by the home fans whenever he touched the ball.

Arsenal were the more lively side but struggled to create many clear chances with Alex Oxlade-Chamberlain and Park chu-Young having their best attempts in the first half.

City had not managed an effort on target until the 83rd minute when Edin Dzeko set Adam Johnson away after an Arsenal corner was cleared and the ball was eventually threaded through to Aguero to fire in his 12th goal of the season.

DIFFICULT WIN
"It was a difficult win and Arsenal played very well," Mancini said on Sky Sports. "It was a great goal and counter attack is the perfect goal. It's important we won and we want to try and go to the final."

Arsenal manager Arsene Wenger felt his side had deserved more. "We feel harshly done by but it's part of the learning process," he said. "We were closer to winning the game than losing it. We were caught on the counter attack for the goal and we were naive. Overall the young players have done well."

City last won the League Cup in 1976, whereas Liverpool are the competition's most successful club with seven triumphs, albeit none since 2003.

Liverpool were worthy winners at Chelsea, dominating the first half in which Andy Carroll had an early penalty saved by Chelsea's reserve keeper Ross Turnbull.

The visitors did take the lead early in the second half when Jordan Henderson played Craig Bellamy into space down the right and he slid a cross into the area for Rodriguez to slot home.

Liverpool, who enjoyed a 2-1 Premier League victory at Chelsea earlier this month, doubled their lead shortly after when Bellamy's free kick was headed in by Kelly.

The result put the spotlight back on Chelsea's Villas-Boas whose side have endured a worrying slump in form after an encouraging start to the season.

"It's a competition that we wanted to go all the way through but we are out in the quarter-finals at home so we should be critical with ourselves and shouldn't accept it," Villas-Boas told Sky Sports. "But we have to move on and reunite."

While captain Steven Gerrard is still injured for Liverpool, his cousin Anthony had a good night, scoring Cardiff's second goal against Blackburn after Kenny Miller had given the Welsh club the lead in the 19th minute.