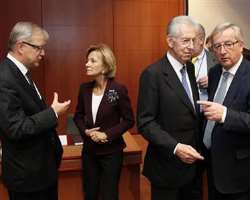 Europe faces a crucial 10 days to save the euro zone after agreeing to ramp up the firepower of its bailout fund but acknowledging it may have to turn to the International Monetary Fund for more help to avert financial disaster.

"We are now entering the critical period of 10 days to complete and conclude the crisis response of the European Union," Economic and Monetary Affairs Commissioner Olli Rehn said on Wednesday as EU finance ministers met.

Euro zone ministers agreed on Tuesday night on detailed plans to leverage the European Financial Stability Mechanism (EFSF), but could not say by how much because of rapidly worsening market conditions, prompting them to look to the IMF.

Italian and Spanish bond yields resumed their inexorable climb towards unsustainable levels on Wednesday, as markets assessed the rescue fund boost as inadequate.

Stocks fell and the euro weakened after ratings agency Standard & Poor's hit some of the world's leading banks with a credit downgrade.

"It must also be remembered that the EFSF is already funding at very wide (borrowing) levels over Germany, struggled in its last auction to raise the required funds and would have its rating put under severe pressure by any rating downgrade of France," Rabobank strategists said in a note.

"This must call into question any plans related to the EFSF. It is yesterday's solution and the market has simply moved on."

"We are now looking at a true financial crisis -- that is a broad-based disruption in financial markets," Christian Noyer, France's central bank governor and a governing council member of the European Central Bank, told a conference in Singapore.

Both schemes would be operational by January with about 250 billion euros from the euro zone's EFSF bailout fund available to leverage after funding a second rescue program for Greece, Eurogroup chairman Jean-Claude Juncker said.

The aim was for the IMF to match and support the new firepower of the EFSF, Juncker told a news conference.

But with China and other major sovereign funds cautious about investing more in euro zone debt, EFSF chief Klaus Regling said he did not expect investors to commit major amounts to the leveraging options in the next days or weeks, and he could not put a figure on the final size of the leveraged fund.

"It is really not possible to give one number for leveraging because it is a process. We will not give out a hundred billion next month, we will need money as we go along," Regling said.

RADICAL MEASURES?
Most analysts agree that only more radical measures such as massive intervention by the ECB to buy government bonds directly or indirectly can staunch the crisis.

The prospects of drawing the IMF more deeply into supporting the euro zone are uncertain. Several big economies are skeptical of European calls for more resources for the global lender.

The United States, Japan and other Asian states are hesitant to chip in unless Europe commits to first use its own resources to fix the problem and peripheral euro zone states map out more concrete steps on fiscal and economic reforms.

"Nobody wants to spend money on something they doubt would work," a G20 official said.

"That goes not only for Europe but for any other country outside Europe. The threshold for seeking IMF help is quite high. Those seeking help need to be willing to give up some of their jurisdiction on fiscal policy and willing to undergo painful reform. Mere pledges and speeches won't do."

New Italian Prime Minister Mario Monti outlined his plans to the euro zone ministers and was told he would have to take extra deficit cutting measures beyond an austerity plan already adopted to meet its balance budget promise in 2013.

Italian bond yields are now above the levels at which Greece, Ireland and Portugal were forced to apply for EU/IMF bailouts, and Rome has a wall of issuance due from late January to roll over maturing debt.

GREECE GETS CASH
The Eurogroup ministers agreed to release their portion of an 8 billion euro aid payment to Greece, the sixth installment of 110 billion euros of EU/IMF loans agreed last year and necessary to help Athens stave off the immediate threat of default.

Juncker said the money would be released by mid-December, once the IMF signs off on its portion early next month.

G20 leaders promised this month to boost the agency's warchest. However, another G20 source said policymakers had made no progress since then in efforts to boost IMF resources, which at current levels may not be sufficient to overcome the crisis.

EU sources said one option being explored is for euro system central banks to lend to the IMF so it can in turn lend to Italy and Spain while applying IMF borrowing conditions.

"We will discuss with the ECB. The ECB is an independent institution, so we will put on the table some proposals and after that it is for the ECB to take the decision," Belgian Finance Minister Didier Reynders told reporters.

With Germany opposed to the idea of the ECB providing liquidity to the EFSF or acting as a lender of last resort, the euro zone needs a way of calming markets and fast.

The ECB shows no sign yet of responding to widespread calls to massively increase its bond-buying although EU officials said it may have to shift, even if the EFSF was bolstered by IMF help.

"Despite the attempt to leverage the EFSF, I would agree that the IMF and European Central Bank have to be in the boat," one euro zone source told Reuters.

A Reuters poll of economists showed a 40 percent chance of the ECB stepping up purchases with freshly printed money within six months, something it has opposed so far.

The poll forecast a 60 percent chance of an ECB rate cut to 1.0 percent next week and a big majority of economists said they expect the central bank to announce new long-term liquidity tenders to help keep banks afloat at its next meeting on Dec 8.

Chancellor Angela Merkel told lawmakers she would not make a deal at a December 9 European Union summit to drop resistance to joint euro zone bonds in exchange for progress on strengthening fiscal rules, MPs quoted her as saying.

She told a closed-door meeting Europe was "a long way from euro bonds," suggesting they may not be ruled out forever.