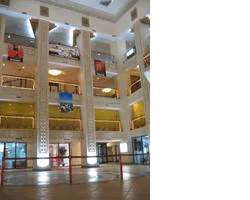 The film, the DISTRICT 9 was censored by the Nigerian Film and Video Censors Board (NFVCB). But Emeka Mba and his boys did not find the guts to stop SilverBird cinemas from showing it in Nigeria. During the exhibition of the film, Passion of Christ, this was the same non-chalant attitude by our people to make money because they don't care who is hurt, abused, insulted or disgraced.

The SONY people are sadists who hates to see happy Black people. They like other foreign Multinationals, who will do anything to belittle us. For the past five years, SONY has increased their campaign for Nigerian market. They have tried several times to entice the Nigerian Film makers and Cannes Festival.

I have always refused to join the pornographic parties. The same Sony has made millions of dollars from the equipments they sold to Nigerians. Thank God I did not fall into their trap. My pity goes to Emeka Mba who does not really know his friends, from enemies. When I advised Emeka to ban showing of Passion of Christ which he did, he was bamboozled with phone calls from Senators, House of Reps Members, Religious Leaders etc. The poor man could not have peace so he quickly lifted the ban. The same SilverBird Cinema, showed the film DISTRICT 9 without the approval of the National Film Video Censors Board. These are some of the pressure and agonies Emeka Mba goes through as the DG of the Censors Board.

My happiness is that I have a major script for a film entitled, TREASON. The Foreign countries like to insult and abuse us in their films, at their ports, in their embassies.
The so-called world powers will only respect you if you can revenge all their atrocities. Let SONY shoot and release their work, I have the answer in my next film. Many years ago I had to send a letter to the then President to ban the film, Flight of the Balloon. The film was abusive, in bad taste and portrays everything bad about Nigeria. Last year DBN showed a film based on BIAFRAN war with federal soldiers killing and maiming the Biafrans. On the contrary, Gen. Gowon described the war as NO WINNER NO VANGUISHED but if you see how barbaric Nigerians were portrayed in the film, you would have no reason but to ban the film. Anybody that shows banned films should be banned for four years for showing uncensored films or films they have not got the final clearance. The hidden problem with SilverBird Cinema is that they are not the importers of the vulgar films, the works were brought into the country by an Indian Lebanese who allegedly shares gate-takings with SilverBird.

I studied film to correct most of the false representations of the blackman by of the white film makers. Films like ZULU, FLIGHT OF THE LOST BALLOON, KING SOLOMON'S MINE, and TARZAN were all made to abuse and denigrate Africans. There are over one billion blacks, so we must also make films that expose the white men's stupidity and bad lives.

The SONY people's apology is like medicine after death. My film called, THE MASK was a hit among Afro-American and European blacks audience because the film presented an African James Bond, kissing, smooching and cuddling white girls. The African actor sent the White men to break into the British Museum and steal the Festac Mask the way they stole it from Benin.
The British Press was very hostile to the film I was later invited to a BBC and ITV documentary with John Major a top British personality, Maria Macory a top Greek singer to appear in the documentary entitled, WHOSE TREASURE. The next thing the British government did, was to remove the original stolen Mask from their Museum and took it into Buckingham palace.

The Nigerian Government was invited to come and buy back their other stolen artifacts. Mr Ekpo Eyo the then Director of the Museum represented Nigeria in the negotiation and it took this ungrateful Nation 1976-2005 before giving me the OON I don't gain anything from. Nigeria must not cry for DISTRICT 9 because my TREASON film will deal with the European Countries and USA. The film will be Premiered outside Nigeria first so that they too can feel us.

There are so many Nigerians who will sell us to foreigners as long as they made money. We just keep on behaving as if we are not part of this World. There is American Film that they portray themselves in bad state. The typical illiterate Nigerian film Maker thinks nothing but money. The poor audience has been putting up with this rubbish. I say we should grow up, make films with patriotic propaganda film while entertaining people. There was a time late Joe Layode and myself refused to act the part in the film ZULU. We were to tie a small cloth over our manhood, then run behind Stanley Baker the white star, shouting master, master.

I thank God I refused the part because I was invited to act a Black Soldier that led some white soldiers out of the enemy zone in a film called “ GUNS OF BATASI” This film was also too down grade African government with Dictator like Idi Amin. Recently the Minister of Information and Communication was gladly saying that her re-branding was working because people are talking about it. Can someone help me tell Madam that all her talk has done nothing than bore people? The Re-branding of Nigerians starts with BELLY, ROAD, EDUCATION, LIGHT and JOBS. I am repeating myself once more we in Nollywood will re-brand Nigeria quicker if Madam stop talking and get results.