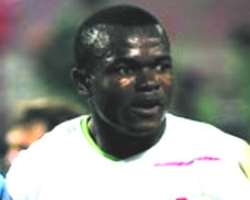 Nsofor
Nigerian international striker, Obinna Nsofor will next month undergo surgery on a niggling knee injury. ''Obi' has been nursing a nagging injury but after his Russian club's two Europa League matches against Sturm Graz of Austria and Anderlecht of Belgium, he will go under the surgeon's knife,' a close source to the Lokomotiv striker said.

Lokomotiv is second in Group L with nine points from four matches and is away to group leader, Anderlecht on December 14.

Nsofor is believed to have carried the injury since his final days at then English Premier League side, West Ham before he switched to Russia in a big-money move in the summer.

The surgery is likely to be done in Italy, where the player featured for Chievo Verona and Inter Milan.

The knee injury prevented Nsofor from featuring for the Super Eagles under new Coach, Stephen Keshi in the recent friendlies against Zambia and Botswana.

'He has been resting the injury and also taking a lot of pain killers to play for Lokomotiv. He has been putting off the surgery, but now the doctors insist he has to do the operation very soon,' another source said.

The 24-year old Nigerian international has made seven appearances for Lokomotiv this season and scored three goals.

His club is sixth on the Russian League table with 53 points from 32 matches and two points outside the bracket to play international football next season.