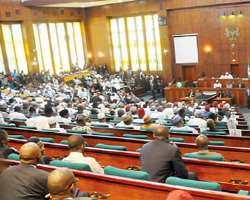 ABUJA, November 29, (THEWILL) - The House of Representatives Tuesday declared that the activities of the Bureau of Public Procurement (BPP) were illegal since it has been operating without the National Council on Public Procurement in breach of the Procurement Act of 2007.


This declaration was made after the House adopted a motion by Hon. Patrick Ikhariale (PDP, Edo) who drew attention of the House to alleged illegality under which the BPP has been operating.


As a result, the House extended a 21-day ultimatum to President Goodluck Jonathan to immediately constitute the National Council on Public Procurement to facilitate the lawful operation of the BPP.


It equally mandated its standing committees on Public Procurement and legislative compliance to investigate the alleged illegality and report back in two weeks.


While presenting the motion, Ikhariale noted that the Act was violated as the appointment of the director general of the Bureau who is to be appointed by the President on the recommendation of the Council was illegally done alleging that, “a person has being illegally performing the functions of the office when it is an undisputed fact that the council which mandatorily ought to make the recommendation for appointment to that office has never been constituted.”


Ikhariale noted that approval for thresholds for the application of the Public Procurement Act as well as approval of the appointment of directors of the Bureau, receipt, consideration for approval of the audited accounts of the bureau and the giving of general directives for the achievements of the objectives of the Act come under the exclusive powers and functions of the National Council on Public Procurement.


He further submitted that without the council, “the bureau has illegally usurped these powers and functions in breach of the objectives of the Act.”

According to him, the bureau is to serve as the Secretariat to the Council, but the absence of the council renders this bureau’s existence superfluous, illegal and a waste of public funds.

“We should be worried that in disregard of the statutory provisions in sections 5 (p) of the Act, to the effect that the bureau shall perform procurement audits and submit such report to the National Assembly bi annually, the bureau has never complied since it commenced operation over four years ago, that since the entire operation of the Bureau without the council is completely illegal. The entire procurement regime is in great jeopardy of litigations.”

He argued that with the new development, the council has lost its relevance as contemplated by the Act, adding that, “the excesses of the Bureau must be checked. We have good laws in this country, but the problem is implementation, we don’t obey our laws because of our personal interest and we must do the right thing.”

Supporting the motion, Hon. Linus Okorie said it is unfortunate that the bureau operates without the constitution of a council as demanded by law.

Also speaking in favour of the motion, Hon. Yakubu Dogara said “the time has come for this House to take steps in addressing the culture of illegality by some of the agencies of executive arm of the government and I want to state here that for as long as the council is not constituted, everything that has taken place there is illegal.

“The law states that the Director General shall be appointed by the recommendation of the NCPP, but unfortunately this was not the case which is another illegality.

“We have a situation whereby the executive encourages companies to commit crimes and the chief law officer of the country has also jettisoned the provisions of the constitution to encourage crime,” he stated.

Others lawmakers that supported the motion include Hon. Akinlabi Kamil, Jerry Manweh and Abubakar Momoh.

In his remarks, the Speaker of the House of Representatives Hon. Aminu Waziri Tambuwal urged members to take their oversight functions more seriously adding that, “committees of the House should be able to come out with this kind of laws without having it as a motion on the floor of the House.”