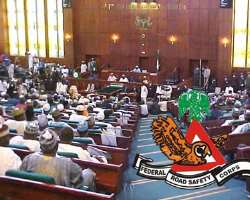 ABUJA, November 29, (THEWILL) - The House of Representatives today took serious exception to the refusal of the Federal Road Safety Commission (FRSC) to comply with its directive that the issuance of the new vehicle number plates and licenses be put on hold pending the outcome of its investigations into the matter.

Chairman of the House committee on FRSC, Hon. Zango Daura and the deputy minority leader of the House, Hon. Abdulrahman Suleiman Kawu expressed their displeasure at the opening of the investigative hearing on the phasing out of old vehicle number plates and driver’s license and issuance of new ones by the FRSC.

Daura declared that the investigations could not continue because both the corps marshal, Osita Chidoka and the chairman of the Joint Tax Board, Mrs. Ifueko Omoigui-Okauru were unable to furnish the committee with the required documents.


Also corroborating the chairman, deputy minority leader Kawu who represented the leadership of the House at the hearing accused Chidoka of refusing to stop the implementation of the policy in spite of the House resolution.

He said, “As the chairman of the committee said earlier, I am here on behalf of the leadership. When we met at the office of the Speaker, many members complained that the resolution of the House is not being complied with by the FRSC. There’s a resolution to that effect, but to our surprise, FRSC ignored our resolution.

“The FRSC was created by an act of the National Assembly and we expect the commission to abide by the law.”

He said the leadership of the House mandated him to find out from the corps marshal why the resolution has not been complied with.

But while defending himself, Chidoka said he was yet to receive any direct communication from the National Assembly on the resolution of the House and that this was the reason the Commission has not been able to comply.

On the delay in submitting documents, both chairman of the Tax Board, Omoigui-Okauru and the corps marshal explained that they got the summons from the House late and were only able to bring the materials required by the committee. According to them, some of the documents and information being sought by the committee dates back to 2007 and they had tried their best to comply with the committee’s demand.

The committee equally challenged Chidoka over a purported statement he made that the National Assembly cannot stop the FRSC from going ahead with the implementation of the new policy. Chidoka however denied the report saying he was misquoted.

Recall that the House at its plenary on 15th November, 2011 had urged the FRSC to suspend the introduction of new number plates and driver’s license saying it is economically oppressive and lacks added value to national security.

The House had thereafter directed its committee on FRSC to investigate the rationale, necessity and circumstances for the planned phasing out of the extant vehicle plate numbers and licenses and their replacement with new ones.