Jonathan Asks Board Member To Act As ICPC Chairman 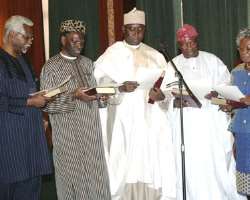 ABUJA, November 29, (THEWILL) - President Goodluck Ebele Jonathan Tuesday in Abuja asked a member of the Board of the Independent Corrupt Practices and Other Related Offences Commission (ICPC) Mr. Ekpo Una Owo Nta to act as the Commission’s Chairman until issues which have arisen over the nomination and confirmation of a new Chairman are resolved.


Speaking after Mr. Nta and four other new members of the ICPC Board took their oaths of office at the Presidential Villa, President Jonathan said that the swearing-in of Mr. Francis Ugochukwu Elechi whose nomination as ICPC Chairman was confirmed by the Senate had been put on hold because of certain disturbing reports.


“We are going to look into the reports we have received because we do not want to do anything that will bring a stain to a sensitive organization like the ICPC,” the President said.


Restating his Administration’s determination to curb the debilitating effects of corruption on national development, President Jonathan said that due care would be taken to ensure that only the most appropriate individuals are appointed to positions of influence and authority in the country’s anti-corruption agencies.


“Until the monster called corruption is dealt with, we will not assume our rightful place in the comity of nations,” the President.


He therefore urged members of the new ICPC Board to collaborate effectively with the EFCC in the prosecution of the national war against corruption.


Responding on behalf of other members of the ICPC Board who were sworn-in today, Mr. Nta thanked the President for giving them the opportunity to serve the nation, assuring him that they will do their best to carry the war against corruption forward.


Other members of the board who took their oaths of office at the ceremony presided over by President Jonathan are: Alhaji Abdullahi Ado Bayero, Alhaji Isa Ozi Salami, Prof. Olu Aina and Dame Julie Onum-Nwariaku.

President Jonathan asked the new Commissioner to work with the INEC Chairman, Prof.

Attahiru Jega towards ensuring that future elections in Nigeria are even better than the widely acclaimed April 2011 general elections.