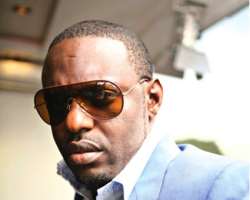 The latest scandal connecting the Nollywood act, Jim Iyke has to do with the wife of a pastor. The said pastor's wife, who also doubles as a minister of God in her deceased husband's church, reportedly has a great admiration for Jim Iyke, which led to her eventual descent from the pulpit to the sexual comfort of popular dude of the make-believe world.

The lover woman, whose late husband was regarded as the father of Pentecostalism in Nigeria, was said to have made manifest her affection for the actor when he visited her residence in one of the south-south states. While the duo excitedly hit off their sexual odyssey, little did the older woman knew that trouble hug in the air for her.

The trouble was however instigated by her son, who unsuspectingly stormed her father's house in the morning of the next day only to find the “Nollywood bad boy” dressed in a pyjamas and being treated to a scrumptious meal supposedly prepared by her mother for him. The son, who couldn't stand the sight of his new step father (Jim) was reported to have blew hot and warned his mother from desecrating his father's house.

WhO iS tHIs Pastor's Wife?