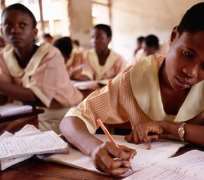 Illiteracy is catastrophic and it exposes citizens to poverty, ignorance, maternal mortality, hunger, violence, abuse, exploitation, trafficking, HIV/AIDS and other diseases. Is any of these abstractions and qualities amply unavailable in Nigeria?

When I insisted to go to school in the good olden days, I was denied the opportunity to be enrolled basically because my arms could not touch my ears from above my head. This was the main yardstick for qualification into the primary school. Before then, people were forced to go to school for western education. Later on, people began to discover the importance of education as the fulcrum for development and the struggle for it – nowadays from infancy – gradually intensified. Fortunately, there was education without people. Unfortunately, there are now people without education.

Yes, we now have people without education. Those who claim to be educated in Nigeria have not allowed education to exert its natural duties in their lives. They are seen to be partakers in anti-societal regeneration. Education is left in the class. They can perfectly quote the philosophies that have transformed nations; they can analyze the indices to national cohesion and growth; they can even administer therapy for life sustainability but all these are on the sheets of paper.

In 2010, a joint UNESCO-UNICEF report estimated over four million Nigerian girls between the ages of six and 11 of HAVING NO ACCESS to primary education. In the same vein, the former Education Minister, Dr. Sam Egwu once released a worrisome and dismal statistics on Nigeria’s out-of-school children. In his ministry’s 2010 ministerial press briefing, Egwu revealed that 17 million Nigerian children had no access to education. This figure he averred was made of 11 million children who should be in primary school and six million who ought to be in Junior Secondary School (JSS).

He said the level of transition from JSS to Senior Secondary School (SSS) was put at 16 per cent, while only six per cent of applicants gain admission into universities, polytechnics and colleges of education, because of the crisis of access to the institutions.

Hear a Nigeria’s education minister describe the educational system of the country, “These statistics are appalling. They reflect the failure of our development policies to address the educational needs of the people. It is sad that many years after the launching of the Universal Basic Education (UBE) scheme and various other educational programmes, Nigeria still has such a large army of children who are not in school. This is catastrophic in today’s knowledge world. There is, today, a minimum literacy benchmark for any country that wants to be counted among the developed nations. Nigeria has fallen far short of this standard.”

The saddest aspect of this situation, he maintained, was the crisis of access to education. Certainly, we cannot attain our goal of joining the league of industrialized countries of the world if we do not educate our children. The out-of-school statistics at the primary school level are particularly distressing. The percentage of those who go on to Senior Secondary School is equally abysmally low. This situation, undoubtedly, is exacerbated by poor teaching and instructional facilities, he pinpointed.

It is not possible to grow a nation with uneducated people. Nigeria needs a well trained and motivated workforce to achieve her development objectives. Nigeria hardly knows the number of children for whom schools should be provided or does it have sincere plans to provide the needed institutions. Even in the existing schools, there is poor teaching because little attention is paid to teacher education. The teachers are not well motivated to do a good job.

Supporting further this educational failure, Executive Secretary of National Universities Commission, Professor Julius Okojie, once noted that the country faces mass illiteracy because nine out of every ten mothers in Nigeria cannot read or write.

In developed countries, before a child is five, he is already learning models of planes and putting models of plastic engines together. But here, ninety-five percent of our mothers are illiterate. When a child in primary school comes back home and says “mummy, help me with my homework” and the mother doesn’t know how to assist, it can be frustrating.

Nearly 34.8 million adults in Nigeria are considered illiterate, according to 2009 data from UNESCO, which ranked it the highest in sub-Saharan Africa. Illiterate females outnumber males by nearly 2 to 1 – there are at least 12.3 million males without schooling, compared with 22.4 million females, around 64% of Nigeria’s total illiterate population.


Who is responsible for this failure in Nigeria’s education? The First Lady, Dame Patience Jonathan attempted to provide a convincing answer to it. Said she, “the inability of leaders to channel resources towards helping the less-privileged get quality education is responsible for the mass failures of school children in examinations in the country.”

Patience, represented by wife of the Vice President, Mrs. Amina Mohammed Sambo, at the second National Conference on Kindergarten Education in Port Harcourt organized by Judith Amaechi’s Empowerment Support Initiative (ESI) noted that if a child is denied early education, he would definitely grow with disabilities in his/her education process.”

The current Education Minister, Professor Ruquayyatu Rufa’i, confirmed inconsistencies in Nigeria’s educational policies which have succeeded in destabilizing the system. “It goes without saying that where there is no stability in an endeavour, there cannot be much progress. Managers of the nation’s education system need to give pride of place to stability of the education system. What we have had of late borders on anarchy, as the system keeps changing like the weather. If the fundamental constitutional framework for education in the country is perpetually in a state of flux, it will be difficult attaining our educational objectives,” Ruquayyatu fumed.

The government has not displayed the discipline required to develop education effectively. In many developed countries, a child must be at least six years old to be enrolled in primary school. Those below six are regarded as not mentally and physically ready for formal education. They are taught in private institutions by teachers who are specially trained to do so. It is sufficient to just ensure that children start primary education at age 6. It’s hard with Nigerians.

The education system contends with the infrastructural gap at all levels of education. Children in many states learn under trees; many sit on bare floors in dilapidated classrooms. Many classrooms have leaking roofs while numerous schools are flooded whenever it rains. There is serious dearth of teaching materials. Performance of students in public examinations is dwindling. Teachers are poorly paid and generally the culture of disrespect for the teaching profession in Nigeria pervades.

An argument ensued between me and my friend who has sent three of his children to Ghana for tertiary education. All efforts to dissuade him from this plan failed and when he narrated all his ordeals to secure admissions for the children in prominent federal universities despite meeting the requirements, I was overwhelmed. Two weeks in Ghana, the children being first timers in Ghana, reported to their father of stability in electricity (they had stayed too long without shouting or hearing the Nigerian conventional proclamation of NEPA!), cleanliness of the environment and Ghanaians obedience to law and order. Lectures are perfect and the school environment in unlike the ones they had visited in Nigeria!

However, we must keep undiluted the fact that education is central to the nation’s development. Much has been pronounced about Vision 20-2020. The United Nations Children’s Emergency Fund (UNICEF) has recommended 26% budgetary allocation to education. Is it effectively implemented in Nigeria? Nigeria’s child education, poverty, almajiri culture and girl-child setback in the north are serious issues the country should subdue.

The government needs to encourage brilliant students to go into teaching. Facilities must be provided and expanded to increase access to education. Education should not be view as only acquiring the ability to read and write but as a heritage for human civilization and valuable system. Economic improvements lie much more on the excellence of educational apparatuses.

On way forward, the government should fund education properly. Private schools and institutions must not make education too expensive even though they would often postulate that ignorance is worse enemy. Therefore, government at all levels as well as private sector should compete in granting scholarships to brilliant Nigerian students. Also, more schools should be built.

Education of the Nigerian children is a great investment for the future. A country that neglects the education of her children and youths is primitive and definitely has uncertain future. Whither Nigeria’s education?

Written by Muhammad Ajah, a writer, author, advocate of humanity and good governance based in Abuja. E-mail [email protected]