Most Guys Go To Cinemas Just For Show Off To Babes, Not To See Movies Kush 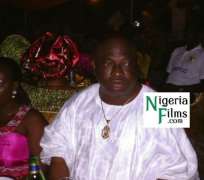 For those who are very conversant with Nollywood marketing line of business, the name Kush is synonymous to a fearless and blunt man at the helms of affairs of High Waves Video Marts. For Olurotimi Aina Kusoro, his real names, the recent cinema culture being brought back is a welcome development. But to him, how many Nigerians can afford the luxury of going to the cinemas to see a movie.

In this interview with Osaremen Ehi James, this Imashayi indigene spoke on some sundry issues. Excerpt

Looking at the marketing structure in Nigeria, would you say we are there or not yet there

We are not there at all, but it is not the fault of the people building the structure. A lot of things in Nigeria just come on the natural. Our things come in a peculiar way in Nigeria, we start things, and on the way, it keeps getting better. So, our structures are not good because our government is not good.

Would you now agree that marketers in Nigeria have taken advantage of the bad structure in Nigeria, especially producing films when they should be concerned with selling films

Well, each time I am asked about the relationship between the marketers and artistes, I always ask from what angle it is referred to. In America, whenever a producer wants to shoot a film, he goes to the studio owners, who are just like the marketers here in Nigeria. The Warner Bros, Fox and the likes. In America, you can go to the banks to get loans to shoot your films. You just let them know what amount you need and how sure you are that the movie will sell. But here, let them come out and tell me how many of them can shoot a movie with their own money.

Is that a statement of fact

Quote me, I am bold to say it, I have been in this business for over 16 years, how many producers have gone to banks to get loans to shoot films. The only person that I know has tried is Kunle Afolayan with Irapada.

No, leave the banks out of this; I am talking about the confidence of the producers themselves of going to their banks to get money to shoot films.
Are you saying that they are not confident about their storylines

Not that too, they are not sure they are going to make back their money after shooting the films.

But if they have a movie with a good storyline, won't it sell

I tell you that there are movies with good storylines that don't sell.

So, what are the things that sell a movie

I told you earlier that we don't have a good government. They have been looking too much into football, NFF is there problem, telecoms, oil and gas and others are their problems because there is money in those sectors. The government has not done anything to reduce piracy, which is why the banks cannot give loans for shooting films. With the high level of piracy in the entertainment sector, nobody is sure of getting back their money.
What steps have been taken by the marketers to fight piracy

We took some steps last year, they all failed and collapsed. We have wasted much money. The truth of the matter is that we have a nonchalant government. If I am investing 10 million naira in a business in Nigeria, I am not sure of making a million naira profit. But if I invest $100,000 in a business in the US, I can confidently tell what I would be making as profit, I can't say that here.

It should have been a welcome development, but I want to blame the government for not being pathetic about our plights in the industry. When Babangida was forming SDP and NRC then, he built structures in every local government within two years. But when they were to be phased out, the structures were handed over to the local governments, why didn't they use them for cinemas? If they had done that, there would have been cinemas in every local government in Nigeria. Films would not have been released massively as we now experience, because filmmakers would take their films to the cinemas to make some money.
Apart from that, with the present security situation in Nigeria, how many Nigerians want to leave their homes to watch films at the cinemas? People go to Ozone, Silverbird and other cinemas just to show off to their babes, they really don't go there to see the movies. They get in the cinemas hall when the movie is almost getting over. Some of the films shown there cannot match what we release here. In Nigeria, films are no more about the picture clarity, but about the storyline.

But at that, the picture clarity of Ghanaian films is better than ours

I will tell you why that is, the Ghanaians, when they make use of our cameras, they edit their films on a higher dimension, if you add that to our cost of production, then our budget for making films will be too high, I mean in the Yoruba sector. In the English sector, rather than invest in equipment, they invest in their actors, but we in the Yoruba, we invest in our equipment. That is why they can pay their actors like Genevieve, Ramsey Noah and others one million naira while we pay the likes of Jide Kosoko, Oga Bello, who have been acting before the Genevieves and others were born, one hundred thousand naira and use the balance on getting equipment.

I will tell you why, they were that because they shot English films. Before someone in California watches my movie, it has to be subtitled in English, and how good is our subtitling, it is only improving now.

But that should not be a problem, since we watch Mexican soaps and Indian films that are subtitled

See, we are looking at Nigeria as if it is a developing nation, we are not. Nigeria is an under-developing nation. Have you ever heard about the economy of Brazil? Their thriving economy there is football. Americans take their money to Mexico to shoot Mexican movies, which they transfer into English. I wanted to do it some years ago, I was supposed to 3.4 million, when you add that to my production cost, and when I take it to Ozone, they will tell me it is a Yoruba film.

Should film language be a problem

I really don't know, they treat us as if we don't shoot films.

But films like Eletan, The Return of Jenifa and others have premiered at the cinemas

For Funke Akindele's case, the cinema owners are playing around the Glo ambassadorial status of Funke. They want to be associated with the brand she is representing, the fact that they want to show her film, they believe that Glo would give them millions of money to brand their cinemas. That is the politics there. So, don't use film shot by Funke as a point.

What about Kunle Afolayan

Kunle can cut legs when it comes to that area, remember, the name of his father rings bell, he is connected.

Lilian Bach is not a Yoruba girl.

But her film's concept, language and everything is Yoruba

I want you to understand the culture of movies in Nigeria, Lilian Bach has been out of the industry for some years now, and she is a foreigner in Yoruba film. I know when she was first ever used in a Yoruba movie. Take it or leave it, the number of Yoruba films shot in Nigeria is more than the English. If you take a hundred Yoruba films and English film, you will come back and tell me that we are better than the English.
In terms of what

In terms of story telling, but for the razzmatazz, they are better than us. The Yoruba films started before them but they got the exposure before us. Do you know why? That was when cocaine business was thriving in Nigeria. They invested their money gotten from drugs in shooting films.

Because all the people that should be involve in it are practitioners. Because of the bias nature and the emotional attachment and favouritism we add to things we do here, we cannot have the proper mechanism. An example was one top seven rating of films released at Idumota I saw on a newspaper publication sometime ago; the reporter put some films that were not even doing well on the chart. I called the editor of the paper to tell him of the wrong information they have successfully passed to the public. The truth is that most of them would because of the favour they have gotten, pay back in good returns.

Then, who should be the right person to be in charge of this

Like I said before, a lot of things are wrong in this country, believe me, it is only few of some can tell you what I am telling you now. Marketing is not yet a professional job, so the charisma to speak is not there for them. The people that started this business were illiterates and moneybags.

Most of them were selling electronics here before their eyes were opened to this business. Then, they give actors a hundred thousand naira to produce more than 10 movies. When Nek Nnabwe did a set of five films, he gave them 22,000 naira, they wanted to run mad because those actors then have gotten such money before. He had shot like 13 Yoruba films before he shot Glamour Girls, which changed the face of movies in Nigeria.

What should be the criteria for film ratings

You see, our various departments of life in Nigeria are not sincere. An example is getting the best telecom network in Nigeria; a person working at Glo will say Glo is the best even if it is not true to him, same with others. We attach emotions to things we do, instead of being objective with our dealings.

That takes me to this, recently, marketers release films of 1hr 30mins into 4 CDs, why that strategy

That was the point of the video club owners. I don't why they do it. If a film is in 3hrs, you can put in four CDs, but when you have 1hr 30mins film and put in four CDs, I don't support that. They fill the available spaces with promos. It is our cheapest form of promo but we have to be careful about it because of those buying the films. We are not selling the promos but the films; I think we should always take note of that.

To the issue of promo, why the many unnecessary promos of products, trado-herbalists and also doing product endorsement as part of the movie also

Can I tell you the truth, I am sure they were never paid for all that. They do that as a strategy to lure the products' parent company to give them money.

What about the Yoyo Bitters and Dr Filani adverts they do

Dr Filani has never paid anybody, I know him very well, he was once my cameraman. He only gave two or three producers some money to shoot a film, so, they feel if they do free advert for him in their movies, he would give them another money. There used to be a time when we spend lots of money doing adverts but just few of us do that now.