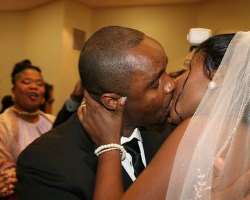 Ini and Hubby
Listen to article

SHE SPOKE FROM HOUSTON,TEXAS!

Actress ini edo-ehiagwina has had enough of the talks and as she says''I am not
a saint but people should stop making me look so bad''.

The miffed actress also spoke on her marriage which she says is doing just fine.In this interview she answers some questions and tells me''STELLA i will not give audience to these kinda of questions next time but rather on questions that has to do with my career or the way forward''

-You are currently holidaying in Houston , when are you back in Nigeria ?
......Yes I'm on holidays right now and i haven't decided yet when I will return to Nigeria.

-What is your marriage status? it is rumored your marriage is hopping on one leg and that is why you are not living in Houston with your hubby

......My husband appreciates the fact that I have a career, I wont say he is particularly excited when i am not around, he simply understands what I do. He is also a very busy person but we both try very hard to balance the scale. He is very appreciative of that. I don't know who is wishing me a bad marriage but I am sorry to disappoint that person, I have a good marriage and so far it is not hopping on one leg,my husband and i are doing just fine,Besides I don't need to keep announcing the status of my marriage to anyone do I?whoever wishes my marraige to crash,thats one wish that will not come to pass.

-As an actress in the public eyes, you have been labeled with a lot of tags, would you want to clear the air?

... Well, I have realized that you can't be in this kind of job without having these tags. Most people cannot different between the actress and the real person. I play diverse roles in the movies so I guess that has also affected how people see me. As for the tags,I have long accepted that.

-It is believed you drink more than you can take and misbehave sometimes on location.
....That's absolutely ridiculous. So not true.

-I dont want to play with words so i will ask you straight up,you have been fingered as a bisexual. is this true?

....That's another false allegation,i am not a lesbian.

-There was a time you put on a lot of weight and the speculations was that you were pregnant and all of a sudden you lost weight and there were talks that you lost the baby due to excessive drinking and smoking, please tell us what happened?

.....Very funny, I was never pregnant and i never lost a baby .I just don't know where these stories spring from. Sometimes I am even shocked at the things I read about myself. Whoever gets pregnant and still drinks?

-Do you like that you are tagged controversial actress?
......I Can't help it; it's the price one has to pay for stardom.

-As an actress how do you plan to re-brand yourself in nollywood?
....I wouldn't like to spill it until it's done .

-Do you take the scripts because of the money or because it's a good story?
... A Good story has always been a priority to me.

-Most of your colleagues have joined the bandwagon of rejecting scripts which does not sell them well to the public ,do you plan to join the bandwagon?
.... I have always been me, I don't join bandwagon, and I always chart my own course.

-Everyone is nollywood is becoming a producer, are you up next?
... Well, I had just concluded my own production and it is still being edited in the studio. Sometimes one gets bored and decides to try something different.

-Aside from acting, do you nurse plans to go into any other venture?
...Definitely.

-Do you think you have paid your dues as an actress in nollywood?
...Absolutely

-The Oprah Winfrey show recently did a small story on your colleague genevieve nnaji. Do you think this will affect you positively as an actress?
.... I hope so.

- What kind of person is ini ?

...I am a good natured girl from a humble and very godly background.

-What do you want to tell people out there that you have never gotten a chance to say?

... Hold on to your faith. Be good to others, even when all they plan against you is evil, make sure your heart is clean and good ,you will walk through every stumbling block of the devil and stand up tall in the end. I am a living testimony.