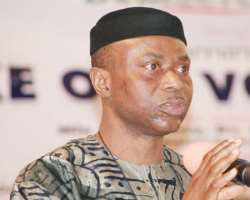 This piece x-rays the monumental and phenomenal people-oriented on-going and completed projects being championed by the Olusegun Mimiko administration in Ondo State.

Former Ondo State Military Administrator, Colonel Ahmed Usman (rtd), recently, gave some insights into what is happening in the state.

Usman said: “I am quite impressed with the development in the state since the inception of Dr Olusegun Mimiko’s administration. Can you imagine that I missed my way into the same Government House, Akure, where I once resided, because of the monumental reconstruction and improvement of the township roads? I am impressed with the new looks being given to Akure, the state capital.”

Usman must have been taken by surprise by the transformation that is going on in Ondo, which, many residents say, is unprecedented and is turning the state into a huge construction yard. Simultaneously, scores of construction works are in process.

But the prominent ones among them are the Oba Adesida Road and Arakala Road. It is not only in the area of road construction that the former military administrator has a testimony to share. He is also a living witness to the entire gamut of the Mimiko administration’s urban renewal plan. Before the advent of the governor, the markets in Akure, just like in other major towns of the state, were at best, slums. But the coming of Mimiko has brought a new lease of life to shopping across the state.

“The Neighbourhood market located within Akure, I learnt, was completed within three months of Governor Olusegun Mimiko’s assumption of office. I chatted with the people in the market to feel the pulse of the market people. I can tell you that they are happy with the governor. The market women told me that the market, as modern and neat as it is, is cheap and secure to do business in,” Usman also stated.

The erstwhile military administrator did not stop there. He extends his testimony to the innovation in auto shopping that the Mimiko government brought to Ondo.

“The last, but not the least place I visited, was the Auto Mart complex which gladdens my heart. The mart has offices, which includes a licensing office, solar powered lights, fire service, pipe borne water, banking facilities and adequate security,” Usman said.

But the story of the former military administrator would pale into insignificance when you visit Ondo to behold the gargatuan transformation that is taking place there courtesy of the Mimiko administration.

“Our dream for an Ondo State where things work is coming to pass before our eyes,” an Akure resident, who gave his name as Femi Oluwasanmi, said. And the story is better told by somebody who has been out of the state capital for some time and is now visiting.

If the visitor does not miss his way, just like it happened to Usman (ex-MILAD), due to the new road network, then he must be lucky. If your entry point is Ilesha Road but you choose to enter through the Owo-Benin end of the inter-state road, there is no way you will miss this picturesque sight on the left side of the road on which sits several hundreds of vehicles.

As you behold the facility, your mind races back to Berger on Lagos-Apapa expressway, said to be the largest auto mart in the West Africa sub-region. Berger Yard is characterised by chaos. But the sight before you is not Berger Auto Market. This is the Caring Heart International Automart. In terms of landmass and capacity to accommodate vehicles, the Akure facility compares with the Berger Market. Where the distinctive difference lies, however, is that whereas disorderliness rules in the latter, modernity and orderliness holds sway in the former. If you are in Ondo and the need to buy a vehicle arises, this is where to do it, and in comfort too. You do not need to move from one location to another looking for the vehicle you want to buy. Unlike what you have in other states, all the vehicles from which to choose from are in one location. And for the auto marketers, the Caring Heart International Automart is a most convenient facility.

It has all the amenities any market of international standard should have. As itemised by Usman, former Ondo MILAD, “this is a product of good thinking and the vision came as a small part of Mimiko’s larger urban renewal package.” But the Akure automart came with an irony. When the governor envisioned the facility and informed the Akure auto marketers that they had to move from the road sides where they were displaying their wares (particularly Oba Adesida Road) in order to recreate the place, the initiative was met with strict resistance. The auto marketers did not want to move because of the fear that the movement would lead to poor patronage as the new site was far away from the town centre.

But the Mimiko administration knew better that if all the auto marketers moved, anybody wanting to patronise them will find them wherever. Today, the motor sellers are smiling.

They operate in a most conducive environment. And patronage remains. They are even said to be paying less for rent.

All these could have come from a governor with a caring heart. The other side to this action is that the road sides where the auto marketers hitherto sold their wares have been reclaimed and recreated to renew the state capital. A resident described the scenario as a win-win situation for the auto marketers and the Mimiko administration’s urban renewal programme. From the Caring Heart International Automart, your journey into Akure takes you into Oba Adesida Road. Oba Adesida Road is one of the major roads in the state capital. Built in 1976, it has fallen into a state of disrepair necessitating reconstruction. The reconstruction is viewed against the backdrop of the fact that every road has 20 years lifespan. By simple calculation, Oba Adesida Road is 35 years old. The reconstruction that is going on there is one that befits a state capital, complete with beautification and street lights so bright at night that one would mistake them for a stadium’s flood lights. The reconstruction has eliminated the indiscriminate parking of vehicles on the road thus impeding traffic. The road has designated bus stops with the state-of-the-art shelters for commutters comfort. If your next port of call is Arakale, then you cannot lose sight of the massive reconstruction that is about 50 percent completed. A single lane road is giving way to a dual carriageway. When completed, the road will decongest Akure major roads. Many houses were demolished to make the project possible. But the landlords are happy because the demolition was carried out with a human face. Every property owner got at least N8 million regardless of whether the structure had documents or not. The project comes with drainages to check flooding in Akure metropolis.

At the entry point of Arakale from Hospital Road is the NEPA Caring Heart Neighbourhood Market, an ongoing project to create a modern market complete with all the needed amenities out of a slum, while, as you exit Arakale Road to Ondo Road, is the Isikan Caring Heart Neighbourhood Market. In the neigbourhood markets scattered across the state, it is a case of “shopping made easy” as attested to by the market men and women. Amenities in the Isikan Caring Heart Market include police post, clinic, abattoir, 12 toilets, fire service and a creche for people that need daycare services for their babies.

Highly subsidised, the rent is about half of what obtains in private shops in town. There is also the Caring Heart Mega School in the Oke Ijebu area of Akure and the Mother and Child Hospital both of which speak volumes of the Mimiko administration’s vision to redefine education and health provision to the people, especially the poor who now have access to quality services in the two sectors, completely free. What is unfolding in Akure and other parts of the state, spearheaded by Mimiko government, is the bold move to build a new state, and the people are on the road to that destination.