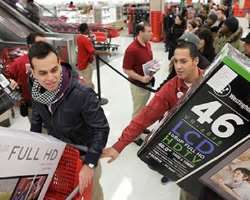 Retailers were hoping for more shoppers like Shawn Elzia as the annual Black Friday bargain stampede marked the unofficial start of what is widely expected to be a middling holiday shopping season.

The Brooklyn, New York teacher, one of hundreds of thousands of shoppers jostling for deals around the country, said he ended up spending about 25 percent more than he planned, even while worrying about the state of the economy.

"I did not expect such deals," the 33-year old said as he left a Macy's store in Jersey City, New Jersey clutching bags full of clothing for himself and his family.

"It's slashed down to the bones," he said. "There were some great discounts if you showed up early."

Deals are always part of the picture on the Friday after Thanksgiving. This year was notable for an earlier opening for some retailers and possibly for the one shopper using pepper spray to make sure she could get a popular video game system.

The early start by stores brought out younger shoppers such as Alina Ybarra, who spent the wee hours of the morning with her friends as they all looked for items for themselves.

"It's really chaotic," Ybarra, 17, said of her first Black Friday outing as she finished her shopping in Santa Monica, California. She said that she liked the deals at stores such as Gap Inc's Old Navy and Urban Outfitters.

"It seems like a lot of teenagers were the primary shoppers, maybe because of the hour, but I think net-net it's not really going to result in an incremental positive for retailers," Ed Yruma, senior equity analyst at KeyBanc Capital Markets, said after checking out crowds at the Mall of America in Bloomington, Minnesota. He said shoppers were not carrying a lot of shopping bags.

Leon Clare, 24, and Shawn Sykes, 27, both U.S. Navy Corpsmen, drove about 125 miles from 29 Palms Marine Base to Santa Monica so they each could spend close to $175 on a pair of Air Jordan Retro 3 shoes in "Black Cement," popular new sneakers from Nike Inc.

"This is for me," said Clare, who plans to spend more on holiday gifts later on in the season.

"I'm leaving for Afghanistan in March. I'm getting something for everyone, just in case I don't come back."

WORRIED... AGAIN
More than 120 stores at the Mall of America opened at midnight. The crowd at that point was about 15,000 people. Mall operators estimated that it was the largest crowd ever at the mall, which is big enough to hold seven Yankee Stadiums.

While eager shoppers emerged from stores around the country lugging big-screen TVs and bags full of video games and toys, it was far from certain that people will pull out their wallets for much more than the best deals this year. Shoppers with limited budgets started using layaway at chains such as Walmart as early as October.

Retail shares fell more than the overall market on Friday.

In Houston, Rico Salvosa, 60, bought two cameras at Best Buy and said he had saved about $170.

"It's worse than before because business is slow," Salvosa, who wholesales stone countertops, said as he left the store with his daughters. "I don't have a lot of savings for holiday shopping. I told them, 'I cannot buy everything that you'd like.'"

Competition among the retailers was fierce as it was among shoppers, as some stores opened hours earlier than before.

Outside Macy's flagship store in New York, some Occupy Wall Street activists chanted "boycott Macy's" and "stop supporting big corporations" even as about 9,000 people lined up to shop when the store opened at midnight.

Opening early appeared to work, judging from the long lines at stores such as Macy's, Toys R Us, Best Buy, Walmart and Target.

"It was crazy around midnight and one in the morning," said a Target employee at the chain's East Harlem, New York store, where the crowd thinned out later on Friday morning.

Even after a Toys R Us in New Jersey had been open for nearly an hour, at 9:50 p.m. EST on Thursday night, there was still a line of about 300 people waiting to get inside.

The 24 hours that started at 9 p.m. Thursday will be the biggest in retail history, with sales estimated at $27 billion, according to Craig Johnson, president of Customer Growth Partners, one of the few experts predicting a strong season.

While it is the busiest day of the year in terms of store traffic, it does not always mean that sales will soar for the season.

Despite brisk sales right after Thanksgiving in 2008 and 2009, total holiday season sales fell as the recession gripped the country.

The National Retail Federation, an industry trade group, expects 152 million people to hit stores this weekend, up 10.1 percent from last year. Yet it expects sales for the full November-December holiday season to rise just 2.8 percent, well below the pace of last year when sales rose 5.2 percent.

Luxury chains such as Saks Inc and those catering to lower-income shoppers, such as dollar stores, are expected to do well this shopping season.

"For our products that are $25,000 and up, growth is phenomenal," said Mark Vadon, founder of online jewelry retailer Blue Nile. "Price points under $100 are also doing really well. For the mass part of the market, consumers are strapped and being a lot more wary."

The online push put pressure on some companies. Walmart.com saw some very high traffic, so some customers may have experienced delays as they tried to check out, it said.

Even Apple Inc gets into the Christmas spirit on Black Friday, the only day that it usually offers discounts. This year it offered its typical $101 discount on its $900-plus Mac laptops and $41 or more off its $499-plus iPads.