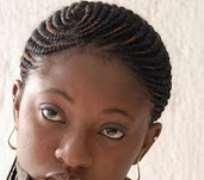 The model who has featured in 2faze's hit song African queen and other popular home videos is scoop to be seriously in love with a London big boy simply called Tom.

Yvonne, who admitted to have been thrice heartbroken in one of her interviews, reliable source squealed that she occasionally spend her holidays with the dude.

We gathered that the relationship might be an altar bound.

Blaze of Glory, Missing Angel and Tade Ogidan's Behind the Siege are some of the popular flick which claimed her to fame before she went on sabbatical a couple of years ago.