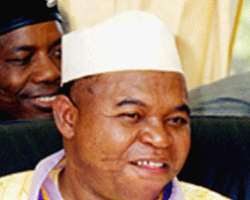 FIDELIS SORIWEI writes that victory in the race for the governorship of Kogi State in the December 3, 2011 election may be difficult to predict between the ruling Peoples Democratic Party and the Action Congress of Nigeria.

The political situation in Kogi State has shown in clear terms that the race for the governorship of the state promises to be more exciting and tougher than before. Over the years, the state has garnered a reputation for being very vibrant politically. Before the cancellation of the last April elections in the state and four others – Bayelsa, Adamawa, Cross Rivers and Sokoto - (because of the issue of tenure) by the Independent National Electoral Commission, the state was listed among those that produced the highest number of governorship aspirants within the ruling Peoples Democratic Party. At a point, the number of formidable aspirants vying for the governorship slot of the PDP was such that it was quite difficult to predict the outcome of the primaries. It was particularly uneasy to predict who was to be the party's flag bearer between the hard fighting Isah Kutepa and the winner of the January primaries, Dr. Jibril Isah, a former executive director in charge of Treasury and Institutional Banking at AfriBank Plc, who was said to enjoy the temporary blessing of the incumbent governor, Alhaji Ibrahim Idris.

As a fallout of the suspension of the governorship election in the five states in April by INEC, the National Working Committee of the PDP resolved to conduct fresh primaries for the state on September 3, 2011. The primaries produced another flag bearer in the person of Capt. Idris Wada, a former executive director of EAS. Wada's emergence did not, however, go down well with Isah and his supporters within the fold of the PDP in the state.

Prior to the decision of the NWC of the PDP to organise new primaries for Kogi State, Isah and some of the elders of the PDP made spirited efforts to retain the candidature of the former banker. Curiously, Governor Idris, a strong deciding factor in the emergence of a flag bearer for the PDP in the Kogi governorship election, found it pertinent to swap support from Isah to Wada. Apart from the speculations and rumour that the governor's decision might have been influenced by personal considerations, the real reason for the change of mind is only known to the key protagonists of the power game within the Kogi PDP and their close allies. What is, however, clear is that the younger brother of the new flag bearer of the PDP is married to a daughter of the governor.

Obviously shocked and irked by the outcome of the primaries, Isah headed for the court in search of a seemingly elusive redress. His major preoccupation was the cancellation of the September primaries and a plea to retain himself as the governorship candidate of the PDP in Kogi State, having been declared winner of the January primaries and presented with the party's flag by the President early in the year.

Although the judge of the Abuja High Court, where he went to seek reprieve, saw otherwise and threw out the case, the issue is far from being resolved. It was learnt that another related case filed in Abuja was referred to the Kogi State High Court for lack of jurisdiction. One noticeable outcome of the fierce contest for the governorship ticket of the PDP in the state is an enduring rift between supporters of Isah and Wada. It was learnt that moves initiated by the PDP to reconcile the two may have hit the rock as Isah is said to have tactically avoided such meetings in preference for the pursuit of a desired reversal of the party's decision to give the ticket to Wada.

Many have expressed serious reservations over the fractionalisation of the PDP ahead of the December 3 election. It is the general contention that it would be perilous for the PDP to venture into the electoral contest with a divided house, especially in the face of the challenge posed by the entry of Alhaji Abubakar Audu into the Kogi governorship fray.

Audu, a former governor of the state, is believed to be a major political factor in Kogi State. He has the record of being the only person, who had had the opportunity to preside over the affairs of the state twice. He was governor of the state in 1992 under the umbrella of the Social Democratic Party in the botched transition programme of military President, Ibrahim Babangida, and in 1999 under the All Nigeria Peoples Party.

Perhaps, one of the strongest points of the Audu candidacy is the enduring perception in Kogi State about his developmental exploits when he held sway as governor. Audu is always ready to tell everybody, who cares to listen, that he initiated and executed most of the major projects in the state. Some of the projects are the cement company at Obajana, the Kogi State University, the Kogi State Polytechnic, the state television station, state secretariat and others.

Last month, Audu told a group of journalists from select media organisations in his house at Asokoro, Abuja, that Kogi witnessed more development in the four years he spent as governor from 1999 to 2003, than the eight years of Governor Idris. Curiously, even some of the followers of his opponents gave it to Audu that his administration made some commendable efforts to develop the state.

Apart from his repeated effort to drum his achievements into the people's consciousness with the intent to create a boost for his political fortune in the December election, Audu is engrossed in worming himself into the heart of the aggrieved ethnic group in Kogi, who have been deprived the governorship of the state because of the Igala hegemony. Since the creation of Kogi State in 1991, no other ethnic group has been allowed to rule the state because of the dominance of the Igala. Audu has come up with a strategy to appeal to the sensibility of the Yoruba, Ebira and others by preaching power rotation as the preferred solution to growing ethnic disenchantment in the state. His contention is that other ethnic groups would be given the chance to govern the state after the single tenure he is entitled to.

In an obvious move to strengthen his contention for the governorship of the state, Audu dumped his party, the All Nigeria Peoples Party for the Action Congress of Nigeria, which is reputed to have inflicted a crushing defeat on the PDP in the South-West and Edo State. Last month, Audu explained that his decision to team up with the ACN was propelled by the realisation that the ANPP lacked the requisite thirst for victory in a serious political contest and was on the lane of depreciation unlike the more determined ACN.

To underscore the magnitude of Audu's strength and determination to wrest political power from the PDP, he dragged the dreaded political war machinery of the ACN to Lokoja to be part of his campaign rally. Present at the event were the National Chairman of the party and former Governor of Osun State, Chief Bisi Akande; the National Leader of the party and former Governor of the Lagos State, Asiwaju Bola Tinubu; the Governor of Lagos State, Mr. Raji Fashola; the Governor of Ekiti State, Dr. Kayode Fayemi; and his counterpart from Edo State, Mr. Adams Oshiomhole; General Secretary of the party, Lawal Shuaibu; Publicity Secretary, Lai Mohammed; Pastor Osagie Iyamu, former Minister of Labour and Productivity, Isah Gwadabe; among others.

However, Audu is not without his daunting challenges. Analysts are of the view that the PDP is too comfortably established in Kogi to be defeated by another political party. It is the view among many that the party would work assiduously to ensure that the current feud is not allowed to get out of hand. “You know that Kogi is a PDP state, you cannot contest that; yes, it might be true that Audu did well when he was governor but that does not mean that others did not also do well. The PDP has worked hard enough and the prevailing situation on the ground is in favour of the party. I can assure you that this candidate is very popular,” an observer said.

Apart from the big factor of the PDP incumbency in the state, Audu is faced with a curious and unusual political challenge from his estranged wife and the former first lady of Kogi State, Mrs. Aisha Audu-Emeje, who is taking on the men for the governorship of the state. Audu-Emeje said that she was motivated to venture into the murky terrain of politics because of the burning desire to wrest Kogi State from the throes of underdevelopment and rot. The enormously wealthy wife of Audu, who is running under the umbrella of the Fresh Democratic Party, identifies poverty and ignorance as the twin evils that have combined to retard the development of the state.

Ironically, Audu-Emeje, who is said to command a large number of followers, does not exempt her husband from the effect of her political utterances and her scathing criticism of governance in the state. “If I had my way, I would not want to speak on individuals. We are around to enrich the quality of debate in the polity. Having said all this, I want to say that there is too much hype in our politics in the state and propaganda has helped to make heroes out of mediocrity and our people to see hell as paradise. You are a journalist and you should know that there are universal indices for leadership assessment. We do not need to go to the political graves to exhume political ghosts to come and govern us in the name of experience when we have vibrant youths. C. S. Lewis said no rearrangement of bad eggs can ever make a good omelette,” she said while reacting to the public perception of her entrance into politics as a mission to halt her enstranged husband.

Even as political activities intensify in the state, it is increasingly difficult to predict who will be the next chief tenant of the Lugard House between the PDP and the ACN candidates come December 3, 2011.