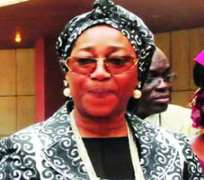 There are bubbles in the political space. And they are gaining desired public attention. One of such is the sack of Chairman, Economic and Financial Crimes Commission (EFCC), Mrs. Farida Waziri, a retired Assistant Inspector General of Police (AIG) by President Goodluck Jonathan on Wednesday.

The removal was the second major bold step taken by the President Jonathan administration this week. The other was the arrest and arraignment of Boko Haram spokesman, Ali Umar Konduga as well as the alleged financier of the sect, Senator Mohammed Ali Ndume, by the State Security Services (SSS) at the Abuja Magistrate's Court on Tuesday. The actions have notched up the image of the government.

Waziri's sudden sack has sparked off varied reactions. While it is celebrated in some circles, it attracted flaks in a few quarters, especially those who believe Jonathan acted beyond his constitutional powers. There are also sharp disagreements on the reason(s) for her sack.

However, Saturday Sun investigation revealed that the sack of Waziri is the first of a major shake-up the Federal Government wants to effect in the EFCC. It was gathered that when a substantive head of the anti-graft agency is eventually appointed, there would be other changes in the EFCC.

Sources revealed that the government opted for a major reorganization of the EFCC now to give the commission a new lease of life as well as prove that the exercise is not targetted at Waziri.

Saturday Sun learnt that the planned shake-up in the entire EFCC was occasioned by the plan to rid the commission of the Waziri elements and sentiments. Also, it was gathered, the exercise is to appease the United States, which had sent a report alleging bribery in the EFCC. The Presidency reasoned that if the report on attempt to bribe those investigating and prosecuting cases is true then there's need to bring in new people into the commission.

It was learnt that the operations and legal departments in the EFCC are likely to be affected in the shake-up.

Apart from the shake-up in the EFCC, checks revealed that government is also considering appointing a serving police office to head the EFCC. The suggestion, in this regard, it was learnt, came about as those pushing it reasoned that a serving police officer would make it easier, in the command of policemen attached to the EFCC. Those who are opposed to this, it was gathered, argue that such arrangement may cause a personality clash between the office of the Inspector of Police and the head of EFCC, as witnessed when Mallam Nuhu Ribadu headed the anti-graft agency. Those in this school of thought are pushing, instead, for the appointment of a retired judge or retired policeman or soldier to do the job.

Checks also revealed that those who are pushing for the merger of the EFCC and Independent Corrupt Practices and other related Offences Commission (ICPC) are using Waziri's sack as an opportunity to get government fuse the two agencies. These elements, it was learnt, say that with a vacuum at the headship of EFCC, the issue of who assumes the executive position, in the event of merger, would not pose any problem.

The office of the Attorney general of the Federal and Minister of Justice had made a case for the merger of the EFCC and ICPC. However, the move suffered a setback at the National Assembly when senators opposed it.

It was gathered that government, persuaded that there is duplication of roles between EFCC and ICPC, wants to represent the bill of the merger plan, with the argument that this would make corruption war more effective.

'Government feels strongly that the merger of EFCC and ICPC would give the war against corruption a boost. Therefore, don't be surprised if the bill on the merger is re-presented. Until this is resolved, a substantive head of the EFCC may not be announced,' a source close to the Federal Government told Saturday Sun.

Meanwhile, the sack of Waziri did not come as a surprise to those who closely followed her activities since 2008. This is despite the fact that she had about seven months left of her tenure, which would have expired in June 2012. The signs as to the type of Czar President Jonathan desired for the anti-graft body have always been there for everybody to see. Pressures had weighed in from different flanks against the woman. The forces that swayed against Waziri, therefore, are:

International circle
Although Waziri undertook several foreign trips, where she participated in high profile conferences on corruption, it was gathered that the international community, especially the United States, did not like her. Sources revealed that this came about owing to the Mallam Nuhu Ribadu sentiment. Sources revealed that the US is yet to forgive Nigeria for the removal of Ribadu and, therefore, did not want Waziri, the beneficiary of the change of guards. It was, therefore, not surprising that United States Secretary of State, Hilary Clinton, at a town hall meeting during a visit to Nigeria in 2009 flayed Waziri's EFCC. She said the body had lost the bite it was noted for during the reign of Ribadu.

US never recanted her position. Instead the country intensified pressure on Jonathan to reorganise EFCC. In fact, it is no longer news that it was one of the conditions given to Jonathan by US before it queued behind him to succeed the late President Umar Yar'Adua.

Mrs. Clinton said: 'We want to see the reinstatement of a vigorous corruption commission. The EFCC has kind of fallen off in the last one year. We will like to see it come back to business to able to partner us.'

As a show of solidarity with the US, the Metropolitan Police severed ties with Waziri's EFCC. Shortly after that, the UK Serious Fraud office bade a goodbye to Waziri. She damned these forces but, perhaps, never knew her decision had a price.

The Presidency
The death of President Yar'Adua was the beginning of the real problem of Waziri. Those that brought her to the office were all kicked out of the cabinet. One of them was Michael Aondoakaa, then Attorney General of the Federation and Minister of justice. She found comfort in the arms of former Chief Justice of Nigeria, Aloysius Katsina-Ala, who, incidentally, was Aondoakaa's mentor. Some of the pressures were staved off by the ex-CJN.

With these people gone, Jonathan's men mounted intense pressures on him to remove Waziri. At that time, former Information and Communications Minister, Prof Dora Akunyili, was lined up as a replacement. Waziri's kinsmen, including the Senate president, David Mark and Gov. Gabriel Suswam, intervened and saved the day. Jonathan was told the implication of taking such a step, especially as he was still soliciting for support from different geo-political zones for his presidential ambition.

Also, former President Olusegun Obasanjo and his loyalists, who were incensed by the removal of Ribadu by Yar'Adua, never ceased from fighting Waziri. Unfortunately for her, Obasanjo had the ears of Jonathan. The presidency set some traps for the ex-EFCC chairman. Several politicians, who got favour from EFCC, had informed the presidency. The car gift she allegedly gave a prominent government official was just one of the traps.

National Assembly
The relationship between the former EFCC boss and the National Assembly has never been robust. When she was initially appointed, Mark hesitated in endorsing her, but coming with the backing of the former justice minister, the Senate accepted the nomination. Prominent Benue indigenes had also mounted pressure on the Senate president to back her. And he did.

Fortunately for the EFCC boss, there was really no reason to seek the intervention of the lawmakers after her confirmation. But an opportunity for them to show that they were not particularly pleased with her performance in office came recently. The House of Representatives came up with a bill seeking an amendment to the EFCC Act to reserve the chairmanship of the commission for a retired Supreme Court Justice or Appeal Court Judge.

Waziri saw this as a subtle move to stop her reappointment next year and mobilised her supporters to criticise the bill and possibly stop the amendment. She didn't succeed in stopping the bill until she was kicked out.

Forces from Gombe
Waziri is involved in the politics of Gombe State, where the husband, Adamu Ajuju Waziri, hails from. The man, who was in the last Senate, wanted to return to the upper legislative chamber but failed to get the support of the then governor of the state, Mohammed Goje.

The development angered the family to the marrow. In fact, the arrest and prosecution of Goje by EFCC recently is attributed to the frosty relationship between Waziri and the former governor. The incumbent governor of the state, Ibrahim Hassan Dankwambo, is said not to be happy with Waziri's action. He worked hard to assist his predecessor in getting bail.

Goje's loyalist and that of the governor are believed to have exerted massive influence on notable individuals in the presidency to ensure that the woman is removed or at worst not reappointed. The veracity of this claim was demonstrated by the wild celebration that followed the announcement of her removal in Gombe. For Goje loyalists, it is a well-deserved move by the President.

Judiciary
The greatest fight waged by Waziri was the long drawn battle with the Justice minister, Mohammed Bello Adoke. Until their differences were somewhat resolved a few months ago, the two had openly engaged in huge fisticuff. Apart from the minister insisting that suits against defenders should be originating from his office, he has been campaigning that EFCC and ICPC should be merged. If the man had had his way, he would have removed Waziri long before now. It is certain that the pressure from him may have watered the ground for her sack.

Apart from Adoke, some judges who believe that Waziri tried to blackmail judiciary, with the allegation that judges were stalling the work of the commission, may have contributed in subtle manner to ease her out. The president of the Federal High Court, Justice Ibrahim Auta had told her in clear term that judges were not happy, for instance, with frequent amendment of charges midway into trials by her leadership.

Also, some senior members of the judiciary were not happy with Waziri's move to set up a special court to try corruption cases. It was gathered that they see this move as an indictment of them and indeed, a vote of no confidence in the courts.

From staff
Apart from external factors the former EFCC boss was said to have received the greatest heat from some staff of the commission. A senior official of the commission told Saturday Sun that two-third of petitions against the woman were couched by EFCC staff and sent to the presidency and AGF's office.

He said: 'Honestly, I can tell you that Waziri was removed by petitions from staff. We were writing with pseudo names to the presidency and even international agencies.'

Fact of the matter
Somehow, that Waziri survived till Wednesday before she was removed was a huge surprise to many who knew the forces that were at her jugulars. The conspiracy against her was much and, according to a source, 'there was no way she could not have ended this way. If she had completed her tenure, certainly, she would not have got a reappointment.'