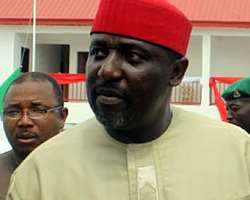 When I was a teenager, my Dad would take me to Leventis Supermarket in Port Harcourt with him on Saturdays. The very first thing he does was to ask for ice cream, and then we will stroll around the supermarket, making purchases, licking our ice cream. I still like ice cream. In a hungry search for one, I walked into Pick and Smile Supermarket, Wetheral Road, Owerri last week .It was 7 pm in the night. Pick and Smile reminds me of the then Leventis Supermarket in Port Harcourt.

Wao! Some white families shopping at night with their police escorts! At the entrance of the supermarket, I saw Chief Obinna and three body guards. Men and women were making purchases inside, children at the toys section. The shop was filled with customers. I was making my own selection when Chief Obinna walked in. Obinna is a staunch member of All Progressive Grand Alliance (APGA), the ruling political party in Imo State. He is a dandy,clean-shaven, usually sucking on a cigarette. He covets media attention and has in the past six-months quenched his thirst for publicity by singing unmerited praises of Owelle Rochas Okorocha the governor of Imo State and asking that critics should give the governor more time before he can be criticized.

Obinna was selecting among the meats in the refrigerator and talking with another guy. They were boasting happily about how Henry Ekpe an Owerri based Journalist was pummelled mercilessly at the premises of Imo State election petitions tribunal. They discussed about how Ekpe was kicked and slapped and thrown into a nearby gutter. "That’s what you get for writing useless reports about governor Okorocha’ the guy said. ‘It will get to all of them soon. All the useless critics of our people’s governor will get it very soon’ Obinna boasted. I wandered around the ice cream fridge listening to their ‘yanyanpu.’

For those of you who don’t know, on Saturday 12th November 2011, Henry Ekpe was savagely beaten in Owerri by APGA loyalists. Ekpe is the Editor-in-Chief of Owerri-based Trumpeta Newspapers. Ekpe has been a critic of the Okorocha government. Section 22 of the 1999 constitution empowers a media worker like Ekpe to demand responsibility and accountability of the government to the people. The press is there to watch the excesses of any government anywhere in the world. The press is the guardian of the people as the fourth estate of the realm.

Beating up a Journalist is reminiscent of the dark days of military jackboot absolutism. The attack on Ekpe is a move against free speech in Imo State. We must condemn this brutal, insensitive and utterly inhuman treatment on Ekpe .It is another indicator of the no respect that governor Okorocha has for press freedom. It is a clear case of moral collapse of governance in Imo state.

I laughed at Obinna’s rotten threat about similar treatment awaiting other critics of governor Okorocha.I would have replied him “gbaaa break! ochu nwaokuko nwe ada’ but for his body guards. When i got home that night, I told a couple of friends and they asked me to watch my back.

Harassing critics for demanding good governance from a governor violates Nigerian constitution and international norms on freedom of expression.1999 Nigerian constitution in section 24 stated that the duty of every citizen is to make positive and useful contribution to the advancement, progress and well-being of the community where he resides.The right to freedom of expression is recognized as a human right under Article 19 of the Universal Declaration of Human Rights and recognized in international human rights law in the International Covenant on Civil and Political Rights (ICCPR).

Okorocha has exhibited a woeful ignorance about the role of a governor. Like someone who did not studied the three branches of government or "checks and balances" in secondary school, he unilaterally announced the sack of elected Council Chairmen and Councilors of Imo state and appointed SOLAD and is busy rescuing his pockets by siphoning LGA funds. A Nigerian governor has no legal authority to sack elected LGA Chairmen . They are democratically elected officials of Councils and have specific period to be in office. This dissolution of elected Council officials and appointing his boys as SOLAD runs contrary to the Constitution that recognizes Councils as the third tier of government. Okorocha is holding Imo LGA’s hostage. Imolites will only recognise elected officials in the council not selected errand boys.Okorocha should free our LGA’s.

Also like a Papa Ajasco politician ,Okorocha unilaterally announced an unconstitutional fourth tier of government in Imo state. Anything outside the Constitution is gross indiscipline. We have to operate by rules and procedures. If you don’t like the rules, amend it. So, if you want to create a 4th tier government, amend the Nigerian Constitution.The 4th tier leaders selected by Okorocha are unacceptable to Imolites as they are not backed by the law.

Why won’t we criticise him when he is actually running Imo State down. He will make promises without action . His policies change like the British weather. He sacked 10,000 Imo citizens since June this year and has adamantly refused to reinstate them.The 10,000 sacked workers are undergoing untold hardship as a result of the suspension of their jobs. They have severally staged an nzogbu-nzogbu protest march to government house to see if they can get their jobs back but no way.

We demand that Okorocha should recall the sacked 10,000 legally employed civil servants in Imo state. Have we not pushed 10,000 persons into kidnappings and armed robbery? It is highly insensitive to unjustly sack workers in a situation when labour market is already over-saturated. The sack of 10,000 workers in Imo state has gone down in history as a testimony of Okorocha’s anti-poor, pro-rich programmes. This is the highest singular sack of workers in one full sweep in Imo State history by any government.

We demand that Okorocha should stop selling Imo public corporations to himself. He sold Adapalm to himself ,he has also sold ITC and is going to sell more. As a policy ,the Okorocha’s government has repeatedly told whoever cares to listen that, “government has no business being in business” and it thus creates basis for Okorocha to sell off Imo state owned corporations to himself for peanuts. This is at the expense of the poor working masses, whose future and that of their teeming dependants are constantly jeopardized as a result of the harsh economic condition that will arise from these sales.

We call for a public probe of the unwholesome sale of public properties in Imo state.The sale of Adapalm and ITC is criminal. This is an act of insensitivity by Owelle to the interests of the poor masses.Imo State government should come out with details of transactions as per Adapalm and ITC. Selling Imo state owned properties at midnight is day time robbery. We know that there is never a time a secret transaction made by a few will be in the interest of the majority. The sale of Adapalm and ITC is robbing the people of their public establishments by the officials they entrusted to make them work. Save us O’ God