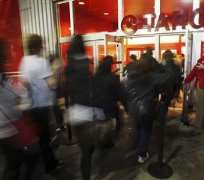 Bargain hunters flocked to stores late Thursday and overnight Friday, searching for deals on big screen televisions, video games and toys while fretting about their own shaky economic well-being.

Some stores, looking to grab as big a piece as possible of what is expected to be a middling holiday shopping season pushed post-Thanksgiving openings into Thursday evening or opened at midnight for the first time in years, getting a jump start on "Black Friday," the traditional beginning to the U.S. holiday shopping season.

The strategy appeared to be working, judging from the 300 people who were lined up at a Toys R Us store on Long Island, New York before it opened at 9 p.m. on Thursday, while shoppers and employees at other stores said the crowds were bigger than in the past.

Shoppers were looking for bargains, but customers like James McBreaty were just what retailers wanted -- those who will also buy things beyond the "doorbuster" deals that retailers offer to entice customers.

"We came for the deals but we were just discussing if we will buy things that aren't discounted," McBreaty, 32, a paralegal who was waiting with his wife Nicole, said. "Most likely the entire store isn't discounted but we're here so we'll probably buy some crap anyway."

In reality, the shopping period has been underway for some time as retailers such as Wal-Mart Stores Inc and Toys R Us started early by offering layaway programs.

Retailers from Amazon.com to Wal-Mart were also offering online deals as Thanksgiving has become one of the biggest online shopping days of the year.

Retail executives and analysts are predicting a more competitive season than 2010. Unemployment still remains at 9 percent, European debt woes are weighing on the stock market and consumer confidence remains spotty.

Some shoppers even feel as though the recession has returned, even if it has not shown up in economic data.

"This year, we are going to do shopping but I don't think it is going to be as much shopping as we usually do. Because of the recession, we are not going to shop as much," Desiree Schoolfield, 49, a public service profession from Queens who was shopping at the Toys R Us in Times Square, said.

REALLY EARLY START
Nelson Sepulveda, a building superintendent from Manhattan, was the first person in line at the Best Buy in Union Square, having queued up at 8 p.m. on Wednesday -- 28 hours before the store opened -- to get the $200 Sharp 42-inch LCD television, Play Station 3 games and other items he wanted.

Wal-Mart, Old Navy, which is part of Gap Inc, and KMart, owned by Sears Holdings', were among the few retailers open on Thanksgiving.

To narrow the gap in store hours with rivals, discounter Target Corp, electronics chain Best Buy and department store chains Macy's Inc and Kohl's Corp will open at midnight - their earliest starts ever.

About 1,000 people were waiting in line at the opening of the Target in Farmingdale,

Those midnight openings drew online petition protests from store workers, and some shoppers also did not like the early openings.

"Tonight all the stores decided to open at midnight which is difficult when you're trying to enjoy dinner with your family," said Louis Clapper, 24, as he shopped at the Walmart in Farmingdale, New York. "Normally I leave the house at midnight, or 3-4 a.m. for a 5 a.m. opening. The stores are opening earlier and earlier."

"Nobody really has to be out so early to come into the store. I really feel like that's better," Tosha Smith, 21, hotel attendant, lives in Queens, said while shopping at Macy's.

At Macy's in Herald Square, four Occupy Wall Street activists chanted "boycott Macy's" and "stop supporting big corporations" even as about 9,000 people lined up to shop at the store.

Others retailers, including J.C. Penney Co Inc, are opening early Friday morning as they did last year.

Wal-Mart started its Black Friday "doorbuster" deals on Thursday at 10 p.m. at its stores. Amazon.com Inc, not to be outdone, will offer its deals online at 9 p.m.

The knock-down-drag-out fight comes as the rebound in sales cooled in October, when many top chains like Macy's and Saks reported disappointing sales.

It will be even tougher for chains that have struggled with sales declines lately, like Gap and Penney.

Last year, after a strong Black Friday weekend, shoppers sat on their hands until closer to Christmas.