Wenger - RVP One Of The Best 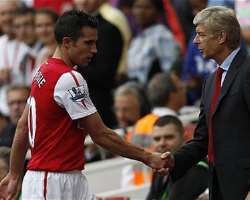 rsenal manager Arsene Wenger thinks Robin van Persie is as good as any striker in Europe after his double ensured they qualified for the Champions League knockout stages.

The Dutchman's brace secured a 2-1 win over Borussia Dortmund at the Emirates on Wednesday that puts the Gunners in an unassailable lead at the top of Group F.

The striker is in the form of his life at present and has now hit 38 goals in 34 appearances this calendar year.

When asked whether that puts van Persie alongside the likes of European heavyweights Lionel Messi and Cristiano Ronaldo, Wenger told Sky Sports: "If he keeps going like that of course.

"Let him play and see at the end of the season. He is the leader of the team as well so what is important is that he leads the team to success.

"I feel he is an exceptional player and I'm happy he can show that."

Pride
Wenger also expressed his pride at his players' achievements in qualifying for the knockout stages with a game to spare.

The Gunners are the only English side to secure their place in the next round to date, defying many pundits' predictions when the draw was made in September.

"Overall I am very happy. We were in a very difficult group and you can see that tonight with Olympiakos winning in Marseille," added the Frenchman

"Therefore I am very proud that we finished top of the group."