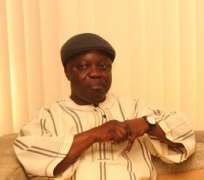 Your Excellency.
Open letter of Protest to Dr Emmanuel Uduaghan over intimidation by Delta State Government and Police Command

On behalf of Delta Patriotic Front, a human rights advocacy group based in Warri, Delta State, with great respect, I wish to draw your Excellency’s kind attention to the above captioned which tramples on the rights of our members and advise as follows:

We condemn in the strongest possible terms the recent action of the Delta State Police Command in denying over 1,000 members of our association the permission to meet at a public venue in Warri, Delta State. To us, this means obstructing peoples’ rights to freedom of association according to internationally recognised standards.

That your Excellency has in the past eight months refused to dialogue with us as stakeholders in the State is a privilege denied but we accept it in good fate. However, on the issue of the aborted meeting of our members, it is unfortunate to learn that your Excellency stood against it in your capacity as the Chief Security Officer of the State. Furthermore, your continued non response to our written protest on the ill action of the State Police Command leaves us with no other impression than to agree that your respected office colluded with the Delta State Police Command to suppress open discussions on Chief James Onanefe Ibori perceived predicament.

We are also very disappointed to hear that your Excellency created impossible conditions that would prevent some known sympathizers of Chief Ibori from speaking at such a meeting that is open to the public. We consider this purported action of your Excellency unacceptable in a healthy civil society that is founded on the ability of all to express non-violent and non- prejudiced opinions, freely and openly, without fear of retribution.

Furthermore, we are shocked to observe the suspension by Delta State Secretary to the State Government of two of your political appointees who provided support to the aborted meeting for adding their signatures to a letter calling for the release of Chief Ibori by the British Government to Nigeria. According to information available to us, this action on the political appointees was endorsed by your Excellency based on your disapproval of their affiliation to our programme with their signatures, a common practice within a modern democracy.

With due respect, Your Excellency’s action of caving into pressure of a determined minority who wish to deny anyone presenting the realities on Ibori from speaking smacks entirely of bias, pre-emption and censorship that does not enhance the reputation of Nigeria’s democracy. Why should it be so dangerous for people to speak out on the issue of Ibori? We are therefore dismayed at the precedent set by the Delta State Government and we strongly urge your Excellency to reconsider these decisions because such actions if not checked, are capable of resulting in the degeneration of democratic society in favour of a dangerous slide towards fascism.

Frankly, your Excellency’s silence on these raised issues is incredible and it is worth considering that your continued mute will be rightly interpreted as deeply disappointing and even alienating or discouraging many supporters of Ibori who have taken pride to support efforts for his quest for freedom through established international practices.

At this juncture, it is important to state that we feel insulted by the ongoing allegations by some close political associates of Your Excellency that our Association is seeking relevance or is involved in opposition politics by accusing His Excellency of watering down people’s commitment to properly advance their concerns on Ibori. For avoidance of doubt and without fear or favour, we stand by our position that Your Excellency has been very insensitive to the interest of Chief Ibori who coincidentally is a benefactor of most politicians in Delta State of today with Your Excellency ranking number one on such a list if and whenever drawn up.

Your Excellency is hereby reminded that in most parts of the world, men and women who committed heinous crimes have been associated with large group of supporters both during trial and after conviction. The Governments of such countries have never placed a ban on organized protests of such groups. Even here in Nigeria hardly has it been recorded that President Goodluck Jonathan has strangulated views that are against his principles.

Why then should an Association like ours with defined interest as supporters of Chief Ibori, a man on trial over just allegations of financial impropriety not feel offended by Your Excellency’s action?

We demand that your Excellency responds to our letter to set the records straight on some fundamental points in relation to Ibori’s continued stay in a British jail and the suppression of voices raised by our the members of our association for his release. Otherwise, we will rightly assume that there is more to this Ibori’s issue than meets the eye.

Your Excellency may please be informed that members of Delta Patriotic Front will continue its engagement with all stakeholders as we are not convinced that Ibori’s issue has received adequate attention. As such, any further action by the State Police Command whether in disguise of Your Excellency’s endorsement to thwart our legitimate rights of holding a fresh meeting or intimidation of our supporters by top members of your Government will be highly resisted through every justifiable measure that is allowed in a democratic setting.