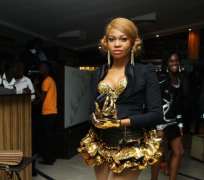 Plans are in top gear to begin a campaign that would preach zero tolerance against all forms of violence against the female gender.

The campaign, which is tagged 'Don't Touch My Body' is the brain child of eclectic pop singer, Suzan Harvey, who is well known as Goldie.
While she is said to be targeting young ladies in secondary school and tertiary institutions, sources informed SBF that the singer is leaving no stone unturned in ensuring that the campaign gets to young females in all spheres of life.

Currently, she has concluded talks with the management of some schools where the campaign would and would commence the campaign in conjunction with a non governmental organization, Project Alert.

According to Goldie, the reason for the campaign is not unconnected with her decision to always and consistently speaking against violence against female gender as well as advocating for the empowerment of the female folks.