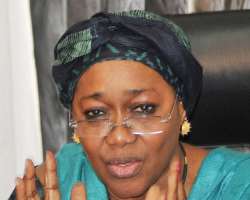 A Statement Wednesday from the Presidency said, "The President has approved the appointment of Mr. Ibrahim Lamorde as the Acting Chairman/Chief Executive of the Economic and Financial Crimes Commission, EFCC.


"The appointment takes immediate effect, and effectively relieves Mrs. Farida Waziri of her position as EFCC Chairman. Mrs. Waziri was appointed EFCC Chairman by Late President Umaru Musa Yar’Adua on May 18, 2008 and confirmed by the Senate on May 27, 2008.


"Mr. Lamorde, an officer of the Nigeria Police, was, until this appointment the Director of Operations of the EFCC. He was also Ag. Chairman of the EFCC before Mrs. Waziri assumed duty at the Commission."