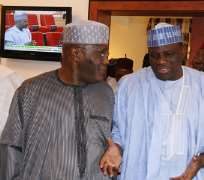 SAN FRANCISCO, November 22, (THEWILL) - Former Vice President Atiku Abubakar has urged the Arewa Consultative Forum (ACF) to brace up and deal with the security challenges facing the county by halting the drift into anarchy.

Receiving an 11-member peace delegation of the ACF led by the former Deputy Governor of Sokoto State, Alhaji Ahmed Gusau, the former Vice President also noted that the socio-economic challenges, which provided the spark for negative backlash, must be treated with urgent priority.

According to the former Vice President, there is no part of Nigeria that doesn’t face security challenges and, therefore, the factors that give rise to them must be tackled as well.

The former Vice President reminded the ACF leaders that they could not detach themselves from politics entirely because politics creeps into many issues. He, however, noted that the current consultation by the ACF leaders would go a long way to help it find its bearing.