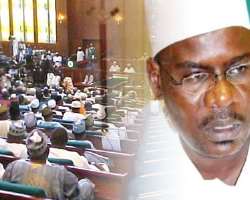 … Stands By Ndume Until Proven Guilty

Senate spokesman, Senator Enyinnaya Abaribe, who made the position of the Senate public, spoke after a closed-door meeting which he said centered on national security and issues of national interest. He said matters concerning the administration of the National Assembly were also discussed.

Recall that a self acclaimed spokesman of the radical Islamic sect, Ali Sanda Umar Konduga also knows as Usman Al-Zawiri, who was paraded before journalists by the Department of State Security on Monday named Senator Ali Ndume, a former governor of Borno State, Alhaji Ali Modu Sheriff and the deceased Nigerian Ambassador to Sao Tome and Principe, Alhaji Umar Pinda as financiers of Boko Haram elements in the north.

Ndume who represents Borno South in the Senate was charged on two counts today for revealing classified information to the sect and criminal conduct. He pled no guilty.

“The Senate wishes to state very clearly that it has always been in the forefront of urging the security agencies to do the necessary job to make Nigeria safe for everyone of us. And so, the Senate wishes to urge the security agencies to continue their investigation because they have told us that the investigation is continuing and at the end of their investigation, they should come out with their report and if anyone is indicted, they should go ahead and follow the dictate of the rule of law as enunciated in the Constitution.

"The constitution of Nigeria has a presumption of innocence and what that means is that every accused person is presumed innocent until he is found guilty. So, what we are saying is that it is a mere accusation and we want the due process to be followed. The due process of course, is what the state security agencies have told us that they are still investigating the matter. So, the Senate cannot come to any conclusion when the investigation is going on," he said.

On whether the Senate has suspended Ndume:
"Naturally, the Senate would be sympathetic with its member and it is also worried about such an insinuation but at the moment, we are very well aware that it is just a mere allegation and the security agencies have said they are investigating the allegation. So, we stand by our member until the investigations are concluded.

"It is just one member of the National Assembly out of 500 that was mentioned and this is, like I continue to say, a mere allegation. I will urge you to exercise some patience and give security agencies some time. You will recall that this Senate has been very supportive of the security agencies to curb the menace and we commend them and are looking up to them to do a thorough job, if there are allegations, we expect such to be thoroughly investigated and properly handled and then, whatever comes out of it, we will then come back to the government of the day."

On whether the Senate will attempt to further investigate to know if there are other members Abaribe said; "It is not the job of the Senate to do security investigation, it is the job of security agencies.”