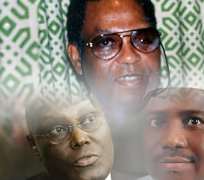 ABUJA, November 21, (THEWILL) – The Speaker of the House of Representatives, Hon. Aminu Waziri Tambuwal has expressed deep sorrow over the death of the Chairman/publisher of the Guardian Newspapers and one time minister of Internal Affairs, Mr. Alex Ibru, who passed on yesterday at 66.

The Speaker in a statement described the late Newspaper proprietor as an accomplished entrepreneur and outstanding media giant who contributed immensely to the growth and development of mass media in Nigeria.

According to the Speaker, "We have indeed lost one of the shining lights of the media industry. I wish to on behalf of the Seventh House of Representatives offer our heartfelt condolences to the Ibru family as well as the management and staff of The Guardian Newspapers over this sad loss."

While praying for the repose of the soul of the deceased, the Speaker enjoined the bereaved to take solace in the fact that the late Mr. Ibru lived a righteous life and left behind a sound and enduring legacy.

Also, a former Vice President Atiku Abubakar has described the late Guardian publisher, as a unique and quintessential newspaper proprietor, whose standard towers above many.

In a tribute to Ibru released by his media office in Abuja, the former Vice President extolled the late publisher as a unique Nigerian who never used his newspaper to seek political influence or personal advantages from those in the corridors of power.

According to Atiku, the late publisher gave Nigerians a quality newspaper, which earned it the respect of all.

Describing the late Guardian newspaper Chairman and Publisher as a rare Nigerian, the former Vice President said Mr. Ibru has left behind the legacy of a fiercely independent newspaper, which is read by many.

“Building and sustaining The Guardian as a formidable newspaper that speaks truth to power at all times is a rare feat in Africa, where dictatorships still hold sway, despite the practice of democratic rule,” Atiku added.

He condoled the Ibru family, Government and people of Delta State, the Newspaper Proprietors Association of Nigeria (NPAN) and the management and staff of The Guardian over the tragic loss.