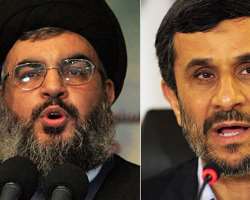 HEZBOLLAH LEADER HASSAN NASRALLAH APPEARS IN APRIL 8, 2007 FILE PHOTO (L) AND (R) IRANIAN PRESIDENT MAHMOUD AHMADINEJAD SPEAKS AT A PRESS CONFERENCE DURING THE FOURTH UNITED NATIONS CONFERENCE ON THE LEAST DEVELOPED COUNTRIES IN ISTANBUL ON MAY 9, 2011
Listen to article

In a significant failure for the United States in the Mideast, more than a dozen spies working for the CIA in Iran and Lebanon have been caught and the U.S. government fears they will be or have been executed, according to four current and former U.S. officials with connections to the intelligence community.

The spies were paid informants recruited by the CIA for two distinct espionage rings targeting Iran and the Beirut-based Hezbollah organization, considered by the U.S. to be a terror group backed by Iran.

"Espionage is a risky business," a U.S. official briefed on the developments told ABC News, confirming the loss of the unspecified number of spies over the last six months.

"Many risks lead to wins, but some result in occasional setbacks," the official said.

Robert Baer, a former senior CIA officer who worked against Hezbollah while stationed in Beirut in the 1980's, said Hezbollah typically executes individuals suspected of or caught spying.

"If they were genuine spies, spying against Hezbollah, I don't think we'll ever see them again," he said. "These guys are very, very vicious and unforgiving."

Other current and former officials said the discovery of the two U.S. spy rings occurred separately, but amounted to a setback of significant proportions in efforts to track the activities of the Iranian nuclear program and the intentions of Hezbollah against Israel.

"Remember, this group was responsible for killing more Americans than any other terrorist group before 9/11," said a U.S. official. Attacks on the U.S. embassy and Marine barracks in Beirut in 1983 killed more than 300 people, including almost 260 Americans.

The U.S. official, speaking for the record but without attribution, gave grudging credit to the efforts of Iran and Hezbollah to detect and expose U.S. and Israeli espionage.

"Collecting sensitive information on adversaries who are aggressively trying to uncover spies in their midst will always be fraught with risk," said the U.S. official briefed on the spy ring bust.

But others inside the American intelligence community say sloppy "tradecraft" -- the method of covert operations -- by the CIA is also to blame for the disruption of the vital spy networks.

In Beirut, two Hezbollah double agents pretended to go to work for the CIA. Hezbollah then learned of the restaurant where multiple CIA officers were meeting with several agents, according to the four current and former officials briefed on the case. The CIA used the codeword "PIZZA" when discussing where to meet with the agents, according to U.S. officials. Two former officials describe the location as a Beirut Pizza Hut. A current US official denied that CIA officers met their agents at Pizza Hut.

From there, Hezbollah's internal security arm identified at least a dozen informants, and the identities of several CIA case officers.

Hezbollah then began to "roll up" much of the CIA's network against the terror group, the officials said.

One former senior intelligence official told ABC News that CIA officers ignored warnings that the operation could be compromised by using the same location for meetings with multiple assets.

"We were lazy and the CIA is now flying blind against Hezbollah," the former official said.