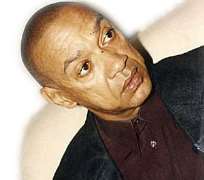 PDP,according to sources has compelling reasons to deny him ticket to run for the position.

As gathered,Mr. Bruce is said to have dual citizenship that of America and Nigeria as at the time when he declared his objective to be the number one citizen of Bayelsa State.

However,the entertainment guru with amazing style and high hopes had kept faith with an grand campaign blitz.When the hammer fell,Bruce said he was everything happening as one of political nuances in Nigeria.

It was revealed that till the time when he was completely disqualified alongside,incumbent governor of Bayelsa State,Timipre Sylva,Timi Alaibe and others,he continued to run his campaign which contained one of the sweetest promises and speeches that any Nigerian political aspirant has ever made.

Mr. Bruce who later accepted the PDP decision in good faith penultimate week declared that what happened in Bayelsa State was unfortunate.