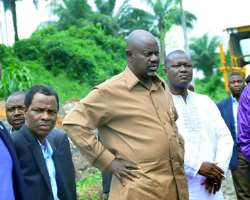 CALABAR, November 21, (THEWILL) - Cross River State Government says it has expended about N1.5 billion on the rehabilitation of federal roads across the state.


He attributed the constant breakdown of the Calabar-Itu Road in particular to the buildup in vehicular movement on the road due to the location of a cement plant, new tank farms and expansion of the Flour Mill as well as the presence of 30 quarries in the state, explaining that about 300 heavy trucks ply the road daily carrying about 600 bags of cement each while the expansion of the flour mills has culminated to several thousand metric tons of flour being moved out of Calabar daily with the quarries supplying stones to various construction sites within the south-south geopolitical zone and beyond.


Imoke said though the rehabilitation work is done without any financial support from the federal government, the state government took up the responsibility because of its resolve to ensure that there is easy flow of traffic on those roads while striving in its policy thrust to remain the nation’s destination, stressing that despite its lean resources, government had to intervene because the inconveniences suffered by commuters and motorists should not be allowed to continue.


The Governor described the rehabilitation work on the Calabar – Itu Road as quite enormous as it will take the construction company handling the project about one month to complete the work, disclosing that the state Commissioner for Works, Mr. Venatius Ikem and the Federal Controller of Works in the state will jointly over see the progress of work to determine its scope in order to do away with the issue of duplication of payment.


On the management of traffic congestion caused by failed portions of the road as well as incessant vehicle breakdown on the bad portions, Imoke disclosed that the Department of Public Transportation (DOPT) is fully on ground to supervise traffic.


Governor Imoke, on behalf of his family, government and people of Cross River State wished him God blessing, happy returns and God’s protection for his family while also asking for God’s wisdom to enable him govern the country well.