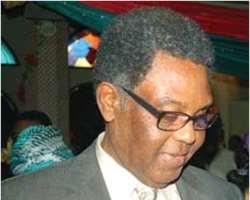 According to news from grapevine,the Chairman and Publisher of The Guardian newspaper, Mr. Alex Ibru is dead.

The former Minister of Internal Affairs after a protracted battle with cancer kicked the bucket Today Sunday,November 20,2011.

Alex Ibru had been battling the dreaded scourge for sometime now,he was on intensive medicare for months before he died.

Mr. Alexander Uruemu Ibru was born on 1 March, 1945 in Delta State, south south Nigeria. He was the youngest of the famous Ibru brothers who hailed from Agbhara-Otor, in today's Delta State and whose entrepreneurship made the name almost synonymous with business in Nigeria.

In 1983, Alex Ibru met with newspapermen, Stanley Macebuh of the Daily Times of Nigeria, Dele Cole, also formerly of that paper and Segun Osoba, formerly of the Nigerian Herald. With 55 percent funding from the Ibrus, they launched the The Guardian in 1983, with Alex Ibru as chairman.

On 2 February, 1996, Ibru's car was sprayed with machine gun fire from unidentified men who had trailed him in a deep-blue Peugeot in Lagos shortly after his departure from the Abacha's government in 1995.

Both Ibru and the editor-in-chief, Femi Kusa were flown to England for treatment of their injuries. Many people believe that he never fully recovered from the injuries.

After Abacha's death in 1998, his Chief Security Officer Hamza Al-Mustapha and others were charged with the assassination attempt.

After working briefly in the family business under the tutelage of his older brother and patriarch, Micheal C.O. Ibru, Alex Ibru launched out on his own and soon became one of the most successful young businessmen in the country.

Ibru was the Chairman of Trinity Foundation, the vehicle through which he did his massive philanthropy, giving support to the poor and the needy. He was also the founder of the Ibru Centre which promotes ecumenism and religious harmony.

Alex Ibru was a Paul Harris Fellow of the Rotary Club International. He was Minister of Internal Affairs of the Federal Republic of Nigeria and member of the highest Provisional Ruling Council, PRC, from 1993 to 1995. As a minister, he introduced far-reaching reforms in the management of Nigeria's prisons and the Immigration Service.

He left the Sani Abacha-led government on principle, after which an attempt was made on his life, allegedly on the orders of the ruling junta. The case on that attempted murder is still in court.

He is a recipient of D.Litt honoris causa of the University of Port Harcourt.

A man extremely passionate about Nigeria and a compassionate promoter of joy of humanity, Ibru's philanthropy, his outstanding entrepreneurship, contributions to the development of the mass media in Nigeria and commitment to selfless service stood him out all through his life.