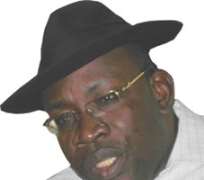 • Dickson
The political tension in Bayelsa, the home state of President Goodluck Jonathan, heightened yesterday when the Peoples Democratic Party (PDP) ignored a court order and conducted the gubernatorial primary for the February 11, 2012, governorship election in the state.

Justice Gabriel Kolawole of the Abuja High Court had on Wednesday issued the order, but PDP national secretariat insisted on going ahead with the primary election.

The primary was, however, robbed of its usual excitement as President Goodluck Jonathan, incumbent Governor Timipre Sylva, statutory delegates, which included National and the state House of Assembly members as well as local government chairmen boycotted the exercise.

Also, the Independent National Electoral Commission (INEC), which had indicated through its National Commissioner on Information, Chief Solomon Soyebi, that it would not be part of the exercise, stayed away from the primary.

Accreditation of delegates commenced about 10:30 a.m. at the Peace Park under tight security with two military helicopters hovering around the venue.

After the accreditation, all the delegates were driven in a bus to the Samson Siasia Sports Complex where chairman of the electoral committe, Capt Caleb Olubolade (rtd), addressed all the aspirants before voting commenced.

But he had hardly finished when four of the aspirants, Francis Amaebi Doukopola, Christopher Enai, Boloubo Justine Orufa, and Austine Febo, drew his attention to their complaint before the national secretariat over the ward congresses that produced delegates for the election.

Not satisfied with the chairman's response, the trio of Enai, Orufa and Febo staged a walkout, describing the process as a sham.

After voting, Olubolade announced Henry Seriake Dickson as winner, having polled 365 votes. Febo and Fred Ekiyegha scored two votes each, while Doukpola and Orufa had one vote each and 13 votes were voided.

Doukopola, who left the venue in anger before the counting of votes was completed, said the entire process was a fraud.

But Dickson in accepting his nomination, promised to build a new Bayelsa where nobody would be excluded nor discriminated against.

He commended his supporters for their resilience and his fellow aspirants for their participation, adding that he was still extending a hand of fellowship to those that are aggrieved.

'With a great sense of responsibility, I accept your nomination as the flag bearer of our great party. In the last couple of days, I have come to appreciate the inconveniencies you have all gone through.

'I promise that because of what you have done today, I am going to build a new Bayelsa. I would not be able to do it alone, but with the support of everyone, especially those who helped me through the campaigns,' Dickson said.

But Governor Sylva, in his reaction, described the primary as a charade.

Sylva, who spoke through his Chief Press Secretary, Doifie Ola, in a telephone interview, said he was confident the judiciary would upturn the exercise, saying 'it cannot stand.'

'The battle has just begun. I believe in the court process and the rule of law. Whatever happened today (yesterday) will be upturned by the courts,' he said.

President Goodluck Jonathan and incumbent Governor Sylva were conspicuously missing at the event. A source close to one of the aspirants said the absence of the president might not be unconnected with the restraining court order, as he would not want to be seen to be disobeying the law. He said, 'the absence of Mr. President is understandable. Because of his commitment and respect for the rule of law, he would not want to create an impression that he is supporting disobedience of court order. But after the exercise, he can always find a way of defending whatever we have done here today.'