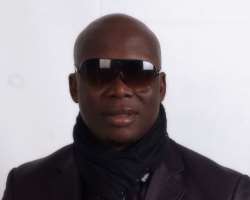 When President Umaru Musa Yar'Adua revealed his Seven Point Agenda in his inaugural speech May 29, 2007 it would never have occurred to him what one hilarious citizen called, 'Godwin Komone,' and baptized, 'Gordons,' will make of his plan, three days after Nigeria's 49th Independence Celebrations.

But the President must face this because on Sunday, October 4, 2009 at Sheraton Hotel and in Nigeria's capital city, Gordons would publicly lend a comic voice to the much debated agenda – and Abuja residents can't wait to chuckle at whatever his hilarious side of the discuss would be.

“The Show is not just going to be like any other comedy show,” the dark comedian assures. “We want to address pressing issues with so much humour; we want people to laugh and also take something home. As comedians, we have moved from the level of being funny to being Social Commentators. I believe with this comedy show we should be able to interlink reality into hilarity.

“I have a passion to also talk to government, and talk to people from all walks of life, and that's what will happen on the forth of October. So, I envisage a comedy event where all acts on stage will say something about the Seven Point Agenda.”

Stella Damacus-Nzeribe has assured to be her dazzling and comic best as she comperes the event alongside Ghana's luminary actor, Van Vicker. Together, they will bring a touch of Nollywood into Gordons debut Live Comedy show, which has Dare Art-Alade, J-Maritns, Samsung, Kefee, Jesse Jaggs, Clever Jay, and Duncan Mighty on the bill.

From Gordons' point of view, “Mr. President has not publicized the Agenda well enough. Elsewhere in developed nations, Governments try out new ideas with comedians. When they talk about it, the government measures the reaction of their citizens, and they know what next to do.”

“I want to use this comedy show to talk about Yar Adua's 7 point Agenda,” he stresses in conclusion. “ The Show will be recorded, and sold on VCD's. That means when people buy and watch the show at home, they will understand the Agenda better. Since the government is not considering that, we want to show the example – if we don't do that, who will?”