Fergie - Chance to kick on 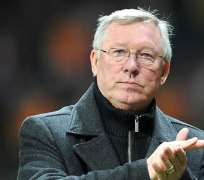 Sir Alex Ferguson has urged Manchester United to grasp the opportunity to kick on and be within a couple of points of the Premier League leaders at the start of 2012.

The reigning champions currently trail local rivals Manchester City by five points, but have already faced all their likely rivals for the title.

Ferguson's men could find themselves eight points adrift of the summit by kick-off against Swansea City on Saturday evening, but the United boss is not concerned by the current situation.

Instead, fully aware his team are stronger in the second half of the season, Ferguson has challenged his players to ensure they are within touching distance of the top by the turn of the year.

Crucial
"We have an opportunity to get consistency and good form and by January we hope we are in the right position in the league," said Ferguson.

"It's always crucial in my diary or calendar that we get there in good order at that time of the year.

"It's an opportunity for us to kick on. I don't think at this time we're looking over our shoulders or up above us, because it's still so early in the season.

"I think the important thing is for us to do our job right. We've got some big games - Newcastle next week, Aston Villa after that and then December is a hectic month.

"You've got the Boxing Day and New Year fixtures. It's a congested programme, so that's why you have to utilise your squad.

"By January 1 we'll hopefully be in the right position, because where you are in the league at that point is always a good indicator of how your chances are and who your dangers are.

"I'd be happy to be top or second as long as we're within a point or two. That will do me fine.

"We've stabilised the situation as we expect to do at this club. We have had a few injuries to deal with, but with one or two exceptions most of those players are coming back.

"If all the rest are fit, then we should have a strong enough squad to deal with everything."