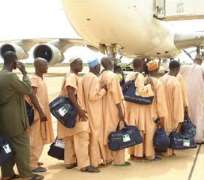 Jerusalem in Israel, Mecca in the Kingdom of Saudi Arabia, and Rome in the Vatican City are a few of the many places worshippers from across the world visit annually for the enrichment of their religious faith. These Holy Cities boast of symbolic religious monuments, landmarks and events that tend to accentuate the veracity of the Holy Books thereby deepening the faith of the practitioners of such religions.

Christianity, Islam, African Traditional Religion, Judaism, name it, most Nigerians are simply incurable religionists so it is otiose hammering the fact that Nigerians will almost never miss out of these holy pilgrimages; in fact, chances are, the Nigerian contingent to such adventures would most probably be one of the largest among the participating countries every year.

Well, I believe that our country needs God to survive and thrive, so this is good. I commend these faithful fellows for the huge sacrifices they make to do these pilgrimages. May they reap the good rewards bountifully. Amen.

But, make no mistake about this: my compliments are exclusively reserved for those godly Nigerians who save and pay for such trips from their pockets. I mean our compatriots who truly understand the importance of a pilgrimage or Hajj and set aside a chunk of personal fund to make this happen. I have absolutely no reason whatsoever to hail those who wait for and push the government to sponsor them to embark on pilgrimages to Mecca or Jerusalem or Rome or wherever.

Come to think of it. Why would the government arrange and sponsor pilgrims to religious pilgrimages? Do the pilgrims really do the state or the Nigerian people any particular favour by embarking on such trips? Christian and Muslim pilgrims alike, do the religious faithful not go for their very own spiritual advancement?

Even toddlers in Nigeria are conversant with one of the most common Christian mantras, salvation is personal. Definitely, salvation is, should be and must be a personal baggage. This I completely agree with. So, if salvation is personal, why would anyone seeking his / her personal salvation wait for other people to pay for this? Why should anyone who sees embarking on a holy pilgrimage to Mecca or Jerusalem as good enough for his / her salvation wait upon the government to use everybody’s money to pay for such entirely personal trips?

Too many times, we heap the entire blame of a heavily mismanaged Nigeria at the doorsteps of the leaders. This might not be wrong a conclusion, as I agree with the school of thoughts that propagates leadership as the bane of Nigeria’s woes. But we have to check within ourselves to see those things we too do wrongly. Or better put, the loopholes we the followers take undue advantage of owing to observed inept leadership. There are a few ways to do this.

One of which is discontinuing these government-sponsored or government -subsidized international jamborees called pilgrimages. Let the leadership of the Christian Association of Nigeria (CAN), the Supreme Council for Islamic Affairs, the Pentecostal Fellowship of Nigeria (PFN), NASFAT, big mosques and churches, and all such other religious entities coordinate (and fund) deserving pilgrims from their flock without bothering the state governors and the president for sponsorship or subsidy.

Similarly, the Pilgrims’ Welfare Boards scattered across all the Capital cities of the country should be proscribed. I am of the opinion that the welfare of pilgrims will be better managed by their own religious leaders directly in their mosques and churches. So, let the senior pastors, the chief imams, the bishops, and their ilk set up and manage their appropriate Pilgrims’ Welfare Board to cater for their own pilgrims. Should it be necessary to get a central coordination, CAN, and its Islamic equivalent can provide this – without bothering the State governors or the country’s president. This will save the government several millions of Naira spent on office spaces, vehicle maintenance, staff emoluments, and all such other costs incurred in running this non-fund - generating seasonal Board and the priceless time that goes into administering them.

By the way, if one may ask, how are the thousands of Muslim pilgrims to Mecca and Christian pilgrims to Jerusalem selected every year? Perhaps, I have not been observant enough, but I am yet to see a newspaper advertorial calling on financially incapacitated intending pilgrims seeking government sponsorship or subsidy to apply. Is ‘man-know-man’ not central to the selection process? Is it not a sound and plausible deduction to say that such trips are cheap but smart ways to secure some ‘insurance’ from some otherwise risky corners? Do powerful politicians not use such ‘favours’ as baits to gain undue political support? I might be wrong, and if I truly am, kindly excuse me.

Meanwhile, the last time I checked Nigeria was a secular state. So what has a secular state got to do with expensive annual religious trips in favour of some (highly connected) Christians and Muslims? For the several decades and the millions sponsored already, what has the Nigerian state got to show for it? Nothing but Corruption! More corruption!! And even more corruption!!! Do we have any more gains? No! Sorry, yes, I almost missed this, how could I? And Boko Haram too!

Furthermore, I wish to state that I am one Nigerian who strongly believes that a good number of the pilgrims do not qualify to be termed pilgrims in the true sense of the word. It has been established time and again that some of the pilgrims embark on pilgrimages for the sole aim of bearing the Alhaji and JP titles (JP is a new acronym for Jerusalem Pilgrim) for the Muslim and Christian Nigerian pilgrims respectively. Some others proceed on pilgrimages on our scarce national bill simply for the asinine motive of travelling and shopping abroad. How long shall we continue to bolster other people’s economy in the name of pilgrimages to the detriment of ours?

As if that embarrassment is not enough, we have also read reports of abscondment, drug peddling, and such vices from pilgrims; the same pilgrims sponsored to Mecca or Jerusalem with our money at a time when over sixty percent of Nigerians live under one dollar a day. Shame!

On the flipside, I am yet to see where it is written that all Nigerian citizens practise only two religions – Islam and Christianity. One still has Nigerian buddies and acquaintances who practise Judaism; others who are Eckankar faithful. Yet still there are some Nigerians who still faithfully practise the original African Traditional Religion in the footstep of our forefathers. Without the least intent to sound sarcastic, these fellows definitely have their own holy places too.

We are all tax-paying Nigerians contributing to one coffer, freely enriched by nature’s gift of hydrocarbons, money-spinning waters and agriculture-friendly lands, protected and bound by the same laws. I am vehemently opposed to this unbalanced tradition of profligacy irrespective of the volume or form. But, if there must be government –sponsorship or subsidy to pilgrimages, why is sauce for the goose not sauce for the gander? Yes, the sexes may differ, but are they not both the same animal?

At this juncture, if I were in the National Assembly, I would probably have said that I do hereby move that these actions be taken as I have prayed and the huge moneys – running into several billions of Naira – uneconomically earmarked annually for these missions be channelled into more realistic, more collective and more purposeful people-based initiatives like poverty eradication, educational development, health facilities upgrade, road maintenance, food and potable water provision, power generation and the likes.

That said, I rest my case – for now.
Philips Akpoviri wrote from the Gulf.