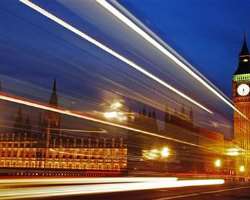 LIGHT TRAILS MADE BY A PASSING BUS ILLUMINATE THE NIGHT SKY IN FRONT OF BRITAIN'S HOUSES OF PARLIAMENT IN LONDON, FEBRUARY 4, 2010
Listen to article

A new experiment appears to provide further evidence that Einstein may have been wrong when he said nothing could go faster than the speed of light, a theory that underpins modern thinking on how the universe works.

The new evidence, challenging a dogma of science that has held since Albert Einstein laid out his theory of relativity in 1905, appeared to confirm a startling finding that sub-atomic particles called neutrinos could travel fractions of a second faster.

The new experiment at the Gran Sasso laboratory, using a neutrino beam from CERN in Switzerland, 720 km (450 miles) away, was held to check findings in September by a team of scientists which were greeted with some skepticism.

Scientists at the Italian Institute for Nuclear Physics (INFN) said in a statement on Friday that their new tests aimed to exclude one potential systematic effect that may have affected the original measurement.

"A measurement so delicate and carrying a profound implication on physics requires an extraordinary level of scrutiny," said Fernando Ferroni, president of the INFN.

"The positive outcome of the test makes us more confident in the result, although a final word can only be said by analogous measurements performed elsewhere in the world."

An international team of scientists shocked the scientific world with the original findings in September.

That first finding was recorded when 15,000 neutrino beams were pumped over three years from CERN to Gran Sasso, an underground Italian laboratory near Rome.

Physicists on the experiment, called OPERA after the initials of its formal scientific title, said they had checked and rechecked over many months anything that could have produced a misreading before announcing what they had found.

If confirmed, scientists say the findings may show that Einstein -- seen as the father of modern physics -- was wrong when he set out in his theory of special relativity that the speed of light is a "cosmic constant" and nothing can go faster.

This would force a major rethink of theories about how the cosmos works and even mean it would be possible, in theory, to send information into the past.

EAT MY SHORTS?
Jim Al-Khalili, a physics professor at Britain's Surrey University whose reaction to the first "faster-than-light" results was that he would eat his shorts if they turned out to be true, said on Friday he remained unconvinced.

"I am not yet ready to get out my knife and fork," he said. "Ideally, the experiment would have to be done somewhere else entirely to try to verify the controversial result that these tiny particles really are going faster than light."

The Italian scientists, whose second set of results were published in online science journal ArXiv at arxiv.org/abs/1109.4897v2,

said one potential source of error in the first results was that the pulses of neutrinos sent by CERN were relatively long at around 10 microseconds each, so measuring their exact arrival time at Gran Sasso could have had relatively large errors.

To account for this, the beams sent by CERN in this latest experiment were around three nanoseconds shorter, with large gaps of 524 nanoseconds between them, meaning the scientists at Gran Sasso would time their arrival more accurately.

"In this way, compared to the previous measurement, the neutrinos bunches are narrower and more spaced from each other," the scientists said. "This permits to make a more accurate measure of their velocity at the price of a much lower beam intensity."

Jacques Martino, director of the French National Institute of Nuclear and Particle Physics, who worked on the second experiment, said while this test was not a full confirmation, it did remove some of the potential errors that may have occurred in the first one. "The search is not over," he said

Christos Touramanis, who heads a neutrino research team at Britain's Liverpool University and is involved in scrutinizing the OPERA result as part of CERN's scientific committee, agreed the new test with short beam bunches had excluded one possible source of systematic errors, but said "a number of other possible effects" still needed to be checked.