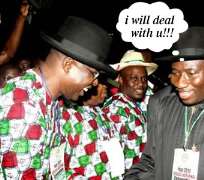 ‘Jonathan, who is viewed weak in the face of the many security challenges facing Africa’s most populous nation risks becoming unpopular amongst nervous Nigerians and the international community if the tension in Bayelsa escalates and leads to attacks on oil pipelines and installations in the volatile Niger Delta’ – THEWILL Analysts.

SAN FRANCISCO, November 17, (THEWILL) – The Peoples Democratic Party (PDP) Thursday said its now controversial Bayelsa governorship primary would still hold this Saturday as scheduled despite an interim order made by Justice Gabriel Kolawole of the Federal High Court Abuja asking the party to shelve the event for now.

“The Peoples Democratic Party (PDP) therefore wishes to make it abundantly clear that our decision to continue with our scheduled primary elections in Bayelsa State is clearly in line with the provisions of the Electoral Act 2010 as amended,” National Publicity Secretary, Professor Rufus Alkali said in a statement, which premised PDP’s action on the statutory provision of “section 87 (10) of the 2010 Electoral Act, as amended, which provides that, “nothing in this section shall empower the courts to stop the holding of primaries or general elections under this Act pending the determination of any suit.”

Alkali also referred to “section 31 (1) of the same Electoral Act which limits the time within which a political party must submit names of it’s candidates to INEC, to not later than 60 days, to the date of elections.”

The National Publicity Secretary denied the existence of a court order even though a copy was posted on the gate of the National headquarters of the party after security men shut the gate in order to stop the court’s bailiffs from serving party officials the document.

The PDP for the first time since its existence stopped an incumbent governor from seeking reelection without giving any reason. Chief Timipre Sylva, the Governor of oil-rich Bayelsa State which is also President Goodluck Jonathan’s home state, was screened out of the primary by the National Working Committee (NWC) of the PDP even though a panel originally set up to screen aspirants had approved the governor for the exercise and issued him a certificate.

Sylva and Jonathan have had no love lost between them but have managed to maintain a civil relationship in public.

THEWILL had previously reported that Sylva allegedly made some utterances which regrettable were not well received by the President, forcing him to move against him.

Sylva Wednesday filed a suit at the Federal High Court Abuja seeking to stop his exclusion from the primary. He has also petitioned the federal electoral commission headed by Attahiru Jega, asking the commission to not monitor the primary.

Analysts fear that the exclusion of Sylva from the Bayelsa governorship election may lead to an escalation of violence and attacks in the volatile Niger Delta region where supporters of both Sylva and Jonathan enjoy the sympathy of former militants who embraced government’s amnesty deal.

The federal government has so far deployed troops and policemen to the state to enable it respond to any security challenge that may spring up.

PDP Governors of the power Nigeria Governors’ Forum (NGF) have also expressed support for Sylva, but have been unsuccessful in convincing President Jonathan to allow him return as Governor under the party’s platform.

Jonathan, who is viewed weak in the face of the many security challenges facing Africa’s most populous nation risks becoming unpopular amongst nervous Nigerians and the international community if the tension in Bayelsa escalates and leads to attacks on oil pipelines and installations in the volatile Niger Delta, THEWILL analysts said, after the PDP formally barred Sylva from the governorship race under its platform.

The Nigerian state is presently battling to wipe out the extremist Islamic sect, Boko Haram from its land. The sect has claimed responsibility for series of deadly bomb attacks mostly in northern Nigeria.

In a related development, the National Legal Adviser of the PDP, Chief Olusola Oke assured journalists Thursday that the party would respond to Sylva’s suit and justify its stand in court on November 22, 2011, the date Justice Kolawole ordered all parties in the suit to appear before him.

“We are aware that the Bayelsa State Governor, Chief Timipre Sylva has gone to court as reported in the newspapers of today. Without doubt and prejudice, it is within his constitutional right to ventilate his grievances in a court of law, especially as now guaranteed by the Electoral Act.

“We will surely respond to the court processes and justify the stand of the party in this matter on the return date of November 22, 2011.

“Our position is the provision of section 31 of the Electoral Act which limits the time within which the party could submit its candidate’s name for the election to not later than 60 days to the date of the election,” Chief Oke said.